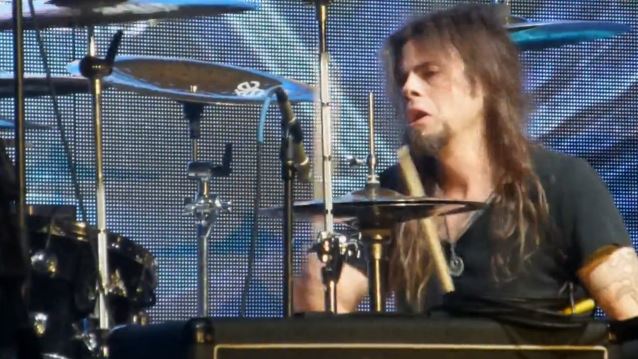 Video footage of QUEENSRŸCHE singer Todd La Torre playing drums for STRYPER on April 20 during the Monsters Of Rock cruise can be seen below (courtesy of Hot Metal).

La Torre, who has played drums since the age of 13, was asked in a 2013 interview if fans could ever expect to see a little change-up where he is back behind the kit and QUEENSRŸCHE drummer Scott Rockenfield upfront singing. He responded: "That could be. Scott and I talk about doing something and they've never done that before. They've never been able to do that before. So, I think visually it would be something great for me. It would be awesome, because I love drumming, and miss drumming, in a live situation. And I know the material. So, we've talked about, maybe doing a really cool dual drumming thing. So it wouldn't be impossible to see me out there on a drum set sometime."

STRYPER entered SpiritHouse Recording Studios in Northampton, Massachusetts in February to begin recording its new album, "Fallen", for a late 2015 release via Frontiers. Songtitles set to appear on the CD include "Let There Be Light", 'Big Screen Lies", the title track and a cover version of the BLACK SABBATH classic "After Forever".

"Fallen" will include a song that was co-written by SEVENDUST guitarist Clint Lowery.