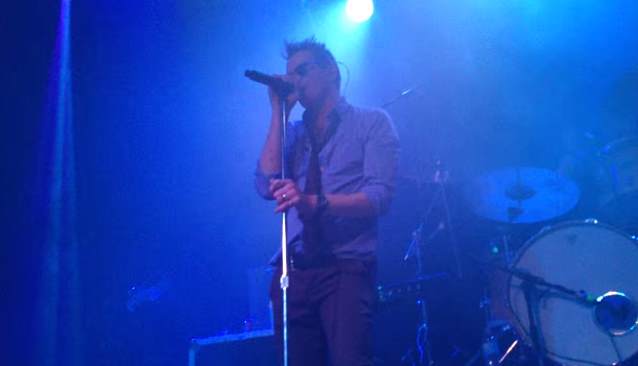 Fan-filmed video footage of estranged STONE TEMPLE PILOTS frontman Scott Weiland performing three new songs — "The Way She Moves", "Beach Pop Rock" and "Circles" — during his April 30 solo concert in Dallas, Texas can be seen below. The tracks are set to appear on the singer's forthcoming solo album, tentatively due before the end of the year.

Weiland's second solo CD, "Happy In Galoshes", was released in November 2008 via Softdrive Records and distributed by New West Records/ RED/Sony. The CD, produced by Scott Weiland and Doug Grean (VELVET REVOLVER, SHERYL CROW, CRYSTAL METHOD),with select tracks recorded by Steve Albini, featured several guest appearances, including Adrian Young, Tony Kanal and Tom Dumont of NO DOUBT, who, along with Grean and Weiland, penned "Paralysis", which features Young on drums. "She's so Cold" was co-written by Gary Beers from INXS.

"Happy In Galoshes" sold 10,500 copies in the United States in its first week of release to debut at position No. 96 on The Billboard 200 chart.

STONE TEMPLE PILOTS fired Weiland in February 2013, claiming that his own solo activities and erratic behavior were detrimental to the band.

"High Rise", the first EP from STONE TEMPLE PILOTS to feature Bennington, sold 12,000 copies in the United States in its first week of release to land at position No. 24 on The Billboard 200 chart. The CD arrived in stores on October 8, 2013 via Play Pen/ADA.