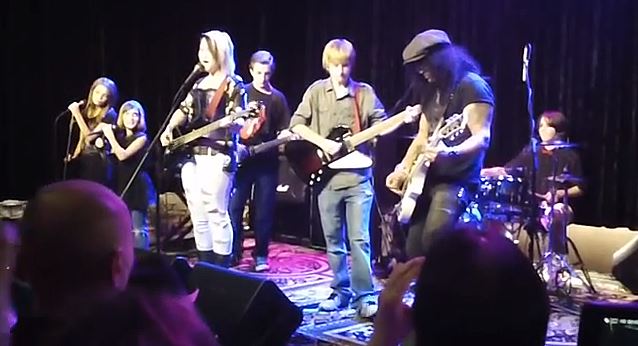 Students at the Brennan Rock & Roll Academy in Sioux Falls, South Dakota got a huge treat this past Saturday, September 28 when Slash came to visit and jam with them. The school provides music education for kids from Boys & Girls Clubs and focuses on playing rock music. Academy founder and Dollar Loan Center CEO Chuck Brennan first met Slash at Rock Fest in Cadott, Wisconsin. The two hit it off and started discussing the Brennan Rock & Roll Academy and the fact that it's the first-ever free music program for the children of the Boys and Girls Clubs.

Brennan said, "Slash was so impressed that he immediately wanted to get involved and show his support to the academy and the kids. Slash [was] the first celebrity rock star to watch the kids perform and see their concert."

When Slash found out that one of the student bands intends to perform the GUNS N' ROSES version of Bob Dylan's "Knocking On Heaven's Door", he insisted that he get up and jam with the kids.

"It was great," he told Keloland.com. "Once we got everything in tune, we were off and running. The drummer was really good. One of the band that played before us, the bass player was amazing, so, yeah, they all have potential."

The legendary guitarist met with the students after the show to offer advice and encouragement.

"It's something you should do," he said. "If you can teach kids how to play and make them feel comfortable learning, put them in a comfortable environment and make it not seem intimidating, that's really the key thing."

He added: "It's all about the kids. I've got two of my own and I think supporting kids and setting them out in the right direction is one of the most important things. I hate to sound like an adult, but that we can do."

A video report from Keloland.com can be seen below.