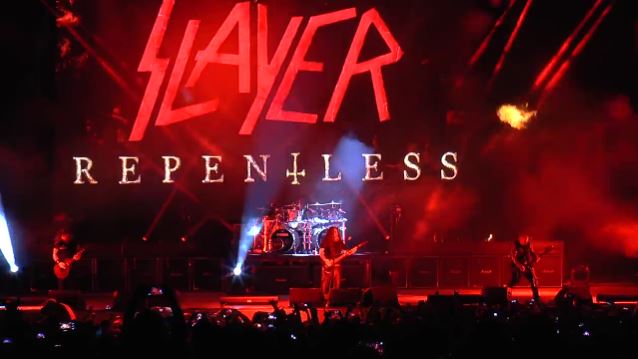 SLAYER performed two new songs — "Repentless" and "When The Stillness Comes" — live for the first time at the opening show of this year's Rockstar Energy Drink Mayhem Festival on Friday, June 26 at Sleep Train Amphitheater in Chula Vista, California. Fan-filmed video footage of the concert can be seen below.

SLAYER's eleventh studio album, "Repentless", will be released on September 11 via Nuclear Blast. The CD's title track is now on sale digitally virtually everywhere, including on Amazon, iTunes and Google.

"Repentless" will be made available in a wide array of formats, as detailed below:

The artwork was created by Brazilian artist Marcelo Vasco in collaboration with the band's Tom Araya and Kerry King.

The Metal Eagle will include the following exclusive items:

The highly anticipated "Repentless" is SLAYER's eleventh studio album, the first since 2009's critically acclaimed, Grammy-nominated "World Painted Blood" and the first with producer Terry Date (PANTERA, SLIPKNOT, SOUNDGARDEN). The band — Tom Araya (bass, vocals),Kerry King (guitar),Paul Bostaph (drums),and Gary Holt (guitar),who recorded lead guitar parts for about a half-dozen of the album's new tracks — started recording "Repentless" in March 2014, and made the track "Implode" available as a free download in April of that year. The band and Date continued to record between September 2014 and mid-January 2015 at Henson Studios in Los Angeles. For the album, "Implode" was completely re-recorded from the ground up, and "When The Stillness Comes", used as an instrumental track in a Scion commercial, got a revamped intro and all new vocals.

"Repentless" also includes "Piano Wire", an unfinished song from the "World Painted Blood" sessions written by Hanneman. About the track, Rolling Stone wrote that it "begins with an eerie guitar line before evolving into a full-on-doom (and classic SLAYER) riff onslaught." King put it this way: "When I hear it, I think 'Jeff.' It sounds like a Jeff Hanneman song."

The 12-track "Repentless" is, according to those who have heard it, a sonic assault of brutal, ominous, lightening-fast and heavy-as-hell music with lyrics that unmask what SLAYER knows best — the terror, the corruption and the societal turmoil that dominates our world.

"The new album sounds like SLAYER," said Araya. "In the past, our fans have always known what to expect, this time they don't. But we really like it, and I don't think the fans are going to be disappointed."