A three-minute video clip of SLAYER drummer Paul Bostaph talking about the recording process for the band's eleventh album, "Repentless", can be seen below.

"I'm usually a five-take guy," Bostaph told Drum! magazine about the way he approaches his parts in SLAYER. "My first take is a warm-up take, the second take gets a little closer, third and fourth takes usually are money. The take after that is very experimental. It's like, I'll go somewhere in my head. I'll do fills and things I never thought of. Fifty percent of that falls on its face; then there's the other 50 percent. It's like, 'Let's put that on the record.'"

Bostaph, who was previously SLAYER's drummer from 1992 until 2001 and recorded four albums with the band, rejoined SLAYER in 2013 after Lombardo was effectively fired from the band due to a contract dispute with the other members of the veteran California-based thrash metal act.

Asked if it feels weird to be back in SLAYER, or if it's like he never left, Paul said: "I can't say it feels the same. We're older, for one. But the production, everything, it's a lot bigger. It's efficient."

In a recent interview with Fuse, SLAYER guitarist Kerry King stated about Bostaph: "Paul, I mean, he's a machine. I don't worry about him at all. He never would have been out of SLAYER if he didn't quit twice. It was never over anything personal — he was always my friend — so it was very easy for him to come back and be a part again."

Speaking to Loudwire about Bostaph's contributions to "Repentless", King said: "I think it's just making the unit whole, more than anything. Of course, Paul can play the shit out of the drums. I didn't realize — and I don't mean this in a detrimental way to Paul — I never realized Paul had so many niche SLAYER fans who are just Bostaph fans; I didn't realize that, and a lot of people had mentioned that to me since Paul has been working on the record. And I think that's great, 'cause people are gonna be stoked when they hear what he did on this record. I used to say 'God Hates [Us All]' was his 'Reign In Blood' — Bostaph's. The new one is his 'Reign In Blood'. The new one's… I would play any song live."

"Repentless" will be released on September 11 via Nuclear Blast. The highly anticipated follow-up to 2009's critically acclaimed, Grammy-nominated "World Painted Blood" was produced by Terry Date, who has previously worked with PANTERA, DEFTONES and SOUNDGARDEN. 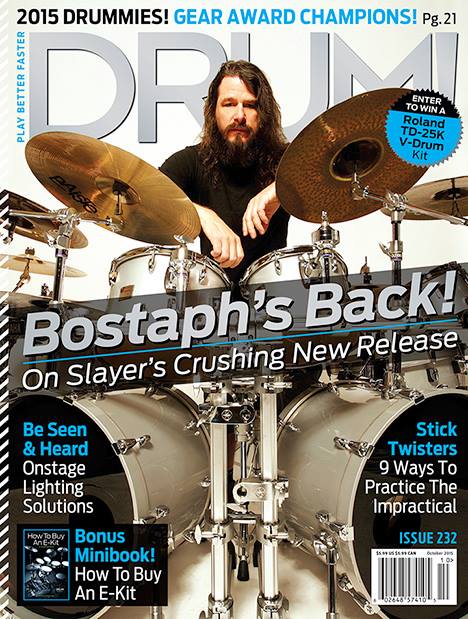