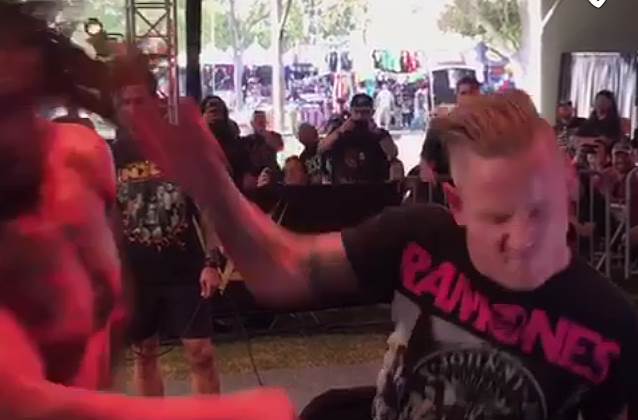 WWE NXT wrestling superstar Samoa Joe got an assist from an unlikely ally at the Aftershock festival in Sacramento, California on Friday, October 23: Corey Taylor.

The SLIPKNOT singer, who was trading barbs with WWE NXT wrestler Baron Corbin on social media in the weeks leading up to this weekend's match between Samoa Joe and Corbin, was in attendance watching the action. Taylor had words with Corbin, and later, during the match, Corbin threw Joe into the stairs in front of Corey, Baron got in Corey's face and Corey slapped him. This got the biggest audience reaction of the match and allowed Joe to get the win.

In a 2011 interview with Wrestling With Pop Culture, Taylor said: "I've been a wrestling fan since I was a kid. If you embrace it for what it is, which is entertainment, I have no illusions about the fact of if it's real or not. But I know it's physically taxing and it takes great skill to make it look good and no skill to make it look crappy. I know the people who rise to the top are the best in the business and it's almost a metaphor for the music business. People come and go, but legends stay forever. My all-time favorite wrestler is Stone Cold, but I also love The Rock, Triple H, Shawn Michaels and the wrestlers I grew up with, which is [Hulk] Hogan, Ricky 'The Dragon' Steamboat, Tito Santana, Andre [The Giant], even 'Hacksaw' Jim Duggan. I got to meet him and Brutus 'The Barber' Beefcake and I was, like, freaking out. I was losing my shit, I was like, 'Oh my God. You guys are awesome.' I'm still a fan."

SLIPKNOT's latest album, ".5: The Gray Chapter", sold 132,000 copies in the U.S. in its first week of release to land at No. 1 on The Billboard 200 chart. It was the band's first new record since the 2010 death of bassist Paul Gray and the 2013 dismissal of drummer Joey Jordison.