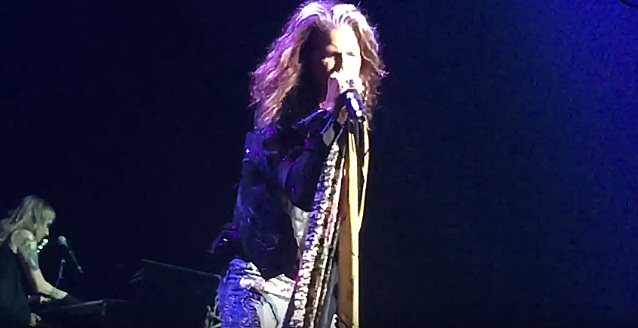 AEROSMITH singer Steven Tyler performed with his Nashville-based band LOVING MARY on April 8 at Zepp Osaka Bayside in Osaka, Japan. Fan-filmed video footage of the concert can be seen below.

Tyler's debut solo album, "We're All Somebody From Somewhere", last July entered Billboard's Top Country Albums chart at No. 1 with first-week sales of 17,000 copies, according to Nielsen Music.

"We're All Somebody From Somewhere" arived on July 15, 2016 via Big Machine Label Group's Dot Records.

The AEROSMITH frontman appeared on "The Ellen DeGeneres Show" and spoke about the album, explaining: "I headed down to Nashville to start working on this project, wrote some kick-ass songs with some of Music City's finest songwriters."

Tyler co-produced "We're All Somebody From Somewhere" with such heavyweights as T Bone Burnett, Dan Huff, Marti Fredriksen and Jaren Johnston.

Tyler spoke about the strength of the new material, telling Rolling Stone: "I believe y'all are gonna listen to this stuff and you're gonna agree with me that it fell from a star. I had nothing to do with this shit, it's just Nashville. There's something so magical about this town and me writing with all these people."