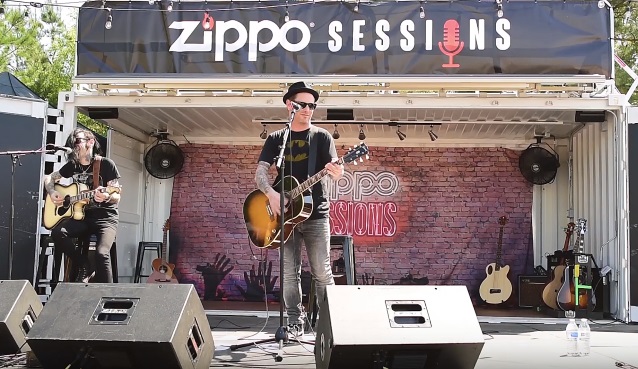 STONE SOUR played a special acoustic set Friday (May 4) as part of the the "Zippo Sessions" at this weekend's Carolina Rebellion festival at Rock City Campgrounds at Charlotte Motor Speedway in Concord, North Carolina. Video footage of the performance — courtesy of Antihero Magazine— can be seen below.

STONE SOUR is continuing to tour in support of its sixth studio effort, "Hydrograd", which came out last June and features the chart-topping rock radio hit "Song #3".

Guitarist Josh Rand sat out STONE SOUR's Canadian tour so that he could receive treatment for "an alcohol and Xanax dependency." The band enlisted a temporary replacement for the trek, with singer Corey Taylor later saying that Rand would rejoin his bandmates on April 27 at the Welcome To Rockville festival in Jacksonville, Florida.