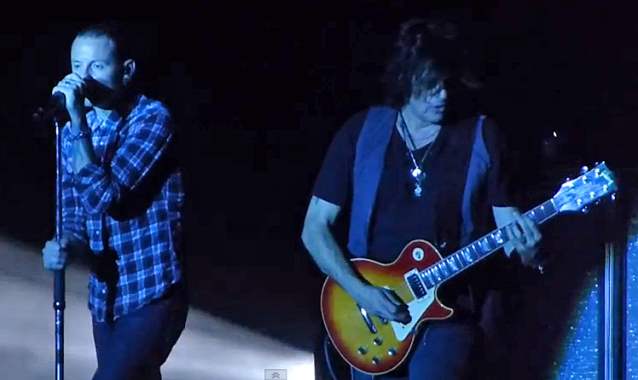 Guitarist Dean DeLeo told The Pulse Of Radio that STONE TEMPLE PILOTS were hoping to mix up their set list now that Bennington was on board. "You know, there's been songs that we've been unable to play on a lot of tours," he said. "So I think that's what's really exciting to us, is being able to play some tunes that Chester has the ability to bring to life."

STONE TEMPLE PILOTS will release a new five-song EP called "High Rise" on October 8. The disc will be the second release featuring Bennington following current single "Out Of Time", which emerged last spring and went to No. 1 on the rock chart.

The band fired singer Scott Weiland in February and sued him in May, accusing him of using the band's name to advance his solo activities, while claiming that his poor performances, late arrivals, and addiction struggles harmed the band's career.

Weiland has countersued, claiming that the band cannot use the STONE TEMPLE PILOTS name without him.