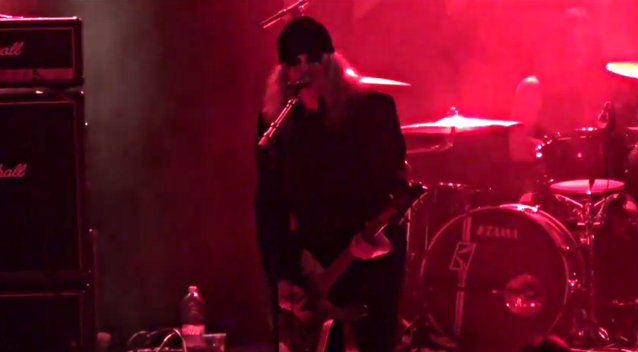 Fan-filmed video footage of TRIPTYKON — the occult/avant-garde metal project formed by former HELLHAMMER/CELTIC FROST singer, guitarist, and main songwriter Tom Gabriel Fischer (a.k.a. Tom Gabriel Warrior) — performing the CELTIC FROST classic "Circle Of The Tyrants" on September 27 at Mörkaste Småland festival at Metropol in Hultsfred, Sweden can be seen below.

Like its predecessor "Eparistera Daimones", the album was produced by TRIPTYKON's singer/guitarist Tom Gabriel Warrior and guitarist V. Santura and recorded and mixed at V. Santura's own Woodshed Studio in southern Germany as well as at TRIPTYKON's rehearsal facilities in Zurich, Switzerland, in 2013 and 2014.

"Melana Chasmata" is further distinguished by featuring, for the second time for TRIPTYKON, the extraordinary art of recently deceased Swiss surrealist HR Giger. Following "Eparistera Daimones", the group began to make arrangements for an entirely different cover for the second album. Completely unexpectedly, HR Giger approached Tom Gabriel Warrior in October of 2011 to express his appreciation of how TRIPTYKON had used his art on the first album and to propose a continuation of the artistic collaboration. This development thus marked the first time any musical artist had worked with HR Giger on three albums (CELTIC FROST's "To Mega Therion", and TRIPTYKON's "Eparistera Daimones" and "Melana Chasmata"), and it commemorates a collaboration that had lasted for 30 years.