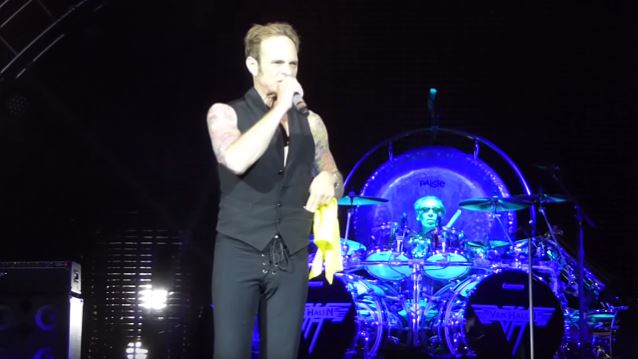 VAN HALEN singer David Lee Roth slammed a beer-throwing fan during the band's August 27 concert at the Susquehanna Bank Center in Camden, New Jersey. The incident occurred just as the group had finished performing the song "In A Simple Rhyme" and was launching into "Dirty Movies". Roth instructed his bandmates to stop playing and addressed the crowd (see video below). "Somebody just threw a beer up here," he said, as a roadie cleaned up the spilled liquid. He continued: "In a younger day, I would've promised I would've slept with his girlfriend. At this point in my career, the roughest, most fucked insult I could probably make to this guy is that I probably already have slept with his wife."

Roth went on to say: "Can you control that motherfucker? I'll talk to you later, sweetheart."

With a hand motion, Roth signaled to his bandmates to start the next song, before adding: "Next time, you save the beer for me, you slime." He then made an obscene gesture with the microphone and flipped the bird.

VAN HALEN was forced to cancel the August 23 scheduled concert in Hershey, Pennsylvania after Roth was advised by doctors not to perform due to a bout with the flu.

VAN HALEN's next performance is scheduled for tonight (Saturday, August 29) in Washington, DC.

The tour will wrap on October 4 at the Hollywood Bowl in Hollywood, California.

The trek is VAN HALEN's first since an aborted North American run three years ago in support of its then-new studio album, "A Different Kind Of Truth".