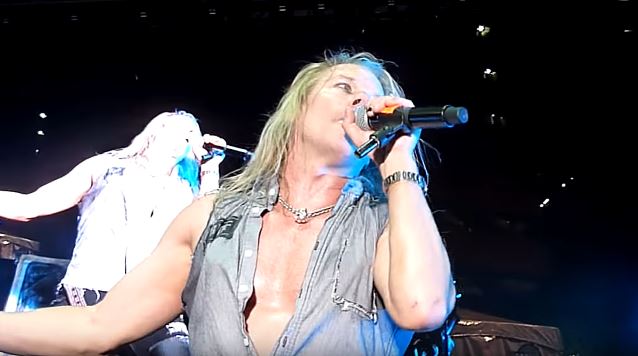 WARRANT guitarist Erik Turner recently told the "Talking Metal" podcast about the progress of the songwriting sessions for the band's long-awaited follow-up to 2011's "Rockaholic" album: "I'm happy to say that Frontiers… they [were the label that] put out 'Rockaholic' in 2011, and it was a two-record deal and they had an option to pick up the second record. And, honestly, for two years, at least, they've been bugging us to do another CD. And we just haven't had the material; we haven't written a whole lot. We tour, we tour, we tour all the time, and everybody's got other little things they do on the side as well, so there just really wasn't any time to make a record. And long story short, after a couple of years of [Frontiers] harping on us and e-mailing us once a month, we finally talked about it as a band and signed the second-option deal about six weeks or so, and it's game on."

He continued: "We have about twelve songs demoed right now, give or take one or two, and I'm really digging the material; a lot of cool stuff there. It's just demos. We're slated to start recording… We actually start pre-production the day after Thanksgiving; we're gonna do three days of pre-production, and then we go into [the studio owned by] Jeff Pilson from DOKKEN and FOREIGNER — he's producing the record — so we're gonna load into his studio. And I think we have six weeks blocked out to record the new CD."

Regarding the musical direction of the new WARRANT material, Erik said: "I would call it a cross between classic '70s hard rock and '80s hard rock that we're known for, from everything that I'm hearing from the demos. It's pretty rocking stuff, but it has that melodic sensibility. We all grew up on pretty much the same bands. Robert's [Mason, vocals] heavily influenced by not only '80s rock bands but guys like BAD COMPANY, Paul Rodgers, Steve Marriott… So a little more grit, a little more blues, rock, I would say, with some good melodies… That's how I would describe it."

Former WARRANT singer Jani Lane suffered from "acute ethanol poisoning" when he died in August 2011 at a Comfort Inn motel room in Woodland Hills, California. The singer had battled alcoholism for years and also had a history of alcohol-related arrests.

Asked how diminishing music sales in the streaming age have affected WARRANT's desire to make new music, Erik told Backstage Axxess: "Well, nobody sells millions of records, but we started out playing music 'cause we can't help it. We just love writing music, recording music, playing music. And that's what we love doing, and we still love doing that. So that, first and foremost, is why we continue to make CDs and digital downloads and whatever they are. And the other thing is that it is a great way to keep the WARRANT name out there and alive and [it helps] with our touring. We do about fifty shows a year every year, and touring has been very good to us. So we love going out playing shows."