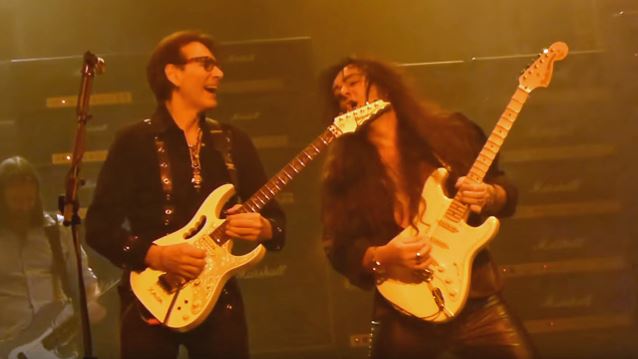 Legendary guitarists Yngwie Malmsteen and Steve Vai performed Yngwie's classic song "Black Star" at the opening show of the "Generation Axe" tour, which kicked off last night (Tuesday, April 5) in Seattle. Fan-filmed video footage of their jam can be seen below.

"Generation Axe" is hitting the road for 26 performances in North America. Joining Vai and Malmsteen during the trek are Zakk Wylde, Nuno Bettencourt and Tosin Abasi.

Yngwie's new studio album is due this spring. He told Seymour Duncan about the CD: "I spent two years [working] on it, touring, recording, touring, recording. And that's much, much better, actually, in a way. Back in the day I would write the songs then rehearse them with some musicians, then go and do a backing track and we'd record it, mix it, learn the songs to go play them on tour, then do it all again. That way isn't necessarily conducive to making the best music, y'know what I mean? So in a very, very backhanded way, this weird twist of fate in the music industry has actually made it a more inspiring environment, for me at least. I can write anytime and record anytime. My recording studio is always open, 24 hours. I can just record when I want and it's a beautiful thing."