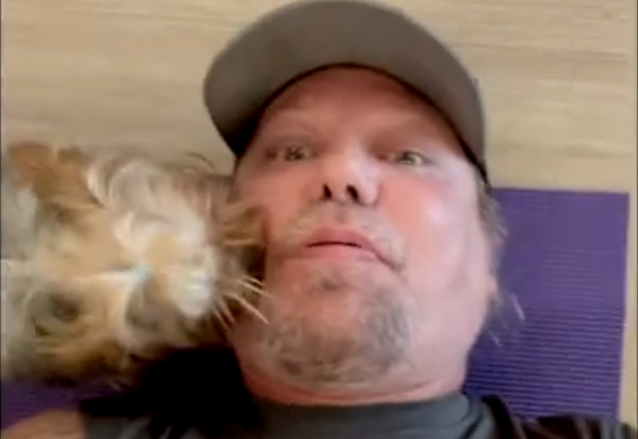 Vince Neil is trying out a new toning machine in an apparent effort to get in shape for MÖTLEY CRÜE's upcoming "The Stadium Tour".

On Thursday (September 2),Neil took to his Instagram to share a video of him at what appears to his home gym, and he wrote in an accompanying message: "Trying it all! Check out Emsculpt Neo abs, They say it's 20,000 crunches in just 30 minutes!! #EmsculptNeo #emsculptpartner #moremusclelessfat #emsculpt @BTLAesthetics".

Last year, fashion and beauty influencer and former Miss Universe Olivia Culpoalso revealed she was using Emsculpt Neo as a way "to get back in shape without having to feel like you're not giving it your all."

According to Swagger, the Emsculpt Neo procedure "is done in-office, is needle-free, and does not require any downtime. The technology uses energy waves that cause your muscles to fire up to 20,000 times per 30-minute session for simultaneous deep tissue muscle building, remodeling, and fat burn."

A little over three months ago, Neil made headlines when he struggled to complete his solo concert at the Boone Iowa River Valley Festival in Boone. Based on fan-filmed video footage of the May 29 gig posted on YouTube, the 60-year-old rocker, who hadn't performed in more than a year and a half due to the COVID-19 pandemic, began losing his voice several songs into his set, which consisted exclusively of CRÜE classics and cover songs previously recorded by the band.