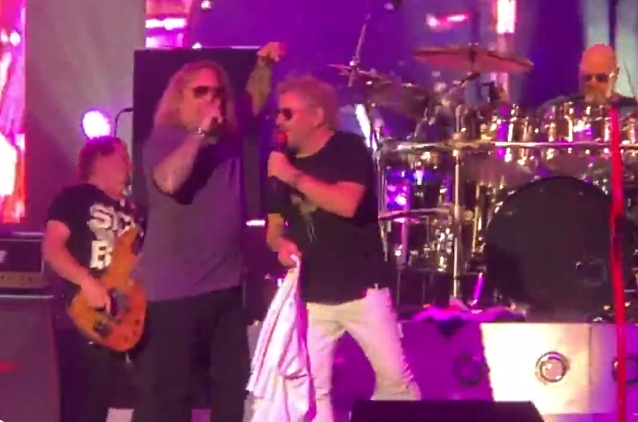 MÖTLEY CRÜE singer Vince Neil joined SAMMY HAGAR & THE CIRCLE on stage on May 19 at the Hollywood Casino Amphitheatre in Maryland Heights, Missouri to perform the MONTROSE classic "Rock Candy". Fan-filmed video footage of the performance can be seen below (courtesy of YouTube user "thome2000").

In his review of the show, St. Louis Post-Dispatch writer Daniel Durchholz said of Vince's contribution to "Rock Candy": "Neil didn't seem to know the words, and his appearance was a needless distraction."

SAMMY HAGAR & THE CIRCLE's concert in Maryland Heights had been rescheduled from the previous night, when the threat of severe weather forced its postponement an hour and a quarter before showtime. About 11,000 attended Sunday, with Neil as the support act, according to the St. Louis Post-Dispatch.

THE CIRCLE, Hagar's critically acclaimed supergroup also featuring Michael Anthony, Jason Bonham and Vic Johnson, kicked off its 23-city North American on April 19 in Reno, Nevada and will end it on June 7 in Chicago, Illinois.

THE CIRCLE's debut album of original material, "Space Between", came out on May 10.