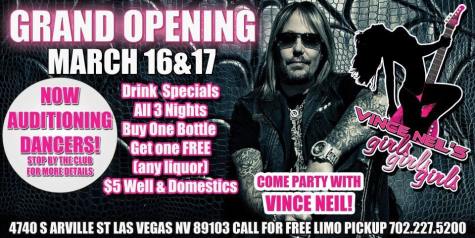 VINCE NEIL On MÖTLEY CRÜE: 'We Don't Have To All Hang Out Together To Be A Band'

On March 16, Sally Steele of Vegas Rocks! magazine conducted an interview with MÖTLEY CRÜE singer Vince Neil at the "soft opening" of his new strip club Girls, Girls, Girls. You can now watch the chat below. A few excerpts follow.

On why he decided to open his own strip club:

Vince: "I've been going to strip clubs my whole adult life, I think. With the song 'Girls Girls Girls', we got inducted in 2007 into the Stripper Fall Of Fame. So it was just something that has been coming for a long time."

"I love new businesses. It's just another cool thing, and I think it's great for Las Vegas. It's something different in a city that has everything. . . I literally live, like, five minutes from [the club]. So I'm gonna be here a lot when I'm in town and come here and hang out. It's a great place to hang."

On MÖTLEY CRÜE guitarist Mick Mars' comment in a recent Vegas Rocks! interview that Vince has "distanced" himself from the rest of the band:

Vince: "Well, I mean, I live in another state than the guys do. Yeah, I guess I am, but it doesn't really matter. It's like, what happens on stage, that's what really counts for MÖTLEY CRÜE. We don't have to all hang out together to be a band; it's what you do on stage [that's important]. So I think it maybe feels a little distant just because, like, they go do and some stuff in L.A., obviously it's harder for me to get there than it is for them to just drive down the street. So I guess just, really, [not] living out of the same city [makes a big difference]."

On the rumors that he doesn't get along with his MÖTLEY CRÜE bandmates, which is why they travel on separate buses:

Vince: "We go on separate buses because we can afford it. People don't understand that. We try to travel comfortably. Nikki [Sixx, bass] has his kids, and Tommy [Lee, drums] has his kids… You can't do that on the same bus. If you can afford to to do it, why woud you wanna live like animals if you can just be nice and comfortable? We've been doing this for 31 years. We don't have to do it like a band that just started out anymore. . . That's all just rumors. I don't know why people say that. Because we're, like, the best of friends. It's just dumb rumors, and people just talk without really knowing anything."

On whether he has any regrets:

Vince: "No. Because everything that's happened to me, I try to learn from those mistakes and make my life better. You can't learn anything until you actually fail at something. So, no, no regrets at all."

On whether he is ever going to have any more kids:

Vince: "No. I just became a grandfather last October. [My son Neil Wharton] had a little boy named Trace."

Neil has set Friday, April 13, as the official grand opening of Girls, Girls, Girls. The club will occupy the former Déjà Vu location opposite the Orleans off Tropicana Avenue a mile from the Las Vegas Strip.

Regarding the kind of entertainment that will be available at Vince Neil's Girls, Girls, Girls, Neil told the Las Vegas Sun, "First, the girls will be edgier. Tattoos won't be banned. They will look like they stepped out of a music video. Hot, provocative and edgy. I know it all comes down to G-strings in the end, but they'll start out with much sexier outfits than you find elsewhere. Second, the music isn't going to be boring. None of that house, generic strip club music. This will be full-on rock and roll."