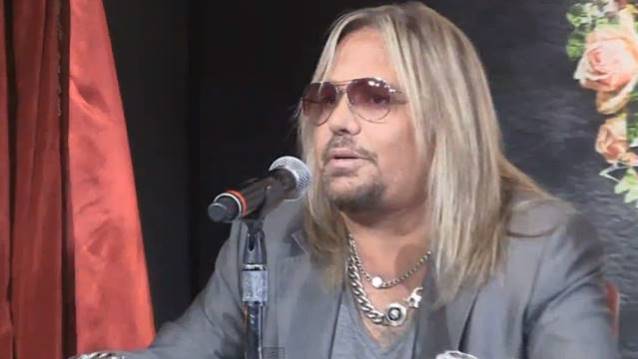 VINCE NEIL On MÖTLEY CRÜE's Plans After 'The Final Tour': 'The Band Isn't Over'

MÖTLEY CRÜE singer Vince Neil spoke to "The Todd N Tyler Radio Empire" about the band's upcoming tour and his relationship with his CRÜE bandmates more than three decades into the group's career. You can now listen to the chat using the audio player below.

The four members of MÖTLEY CRÜE held a press conference on January 28 at Hotel Roosevelt in Los Angeles where they announced that the band will launch its "Final Tour" later this year, with the group planning to play more than 70 shows in North America in 2014 and more overseas in 2015. Making it official, the four members of the band had their lawyer draw up a formal "cessation of touring" agreement that goes into effect at the end of 2015 and prohibits the members of the group from going on the road again under the MÖTLEY CRÜE banner.

Vince, 52, told "The Todd N Tyler Radio Empire" about CRÜE's upcoming "The Final Tour", which begins later this month: "The band isn't over. Here's the thing. MÖTLEY CRÜE is a business. And there's different parts of the business — merchandising, there's music and there's touring. We're just ceasing the touring part. But there's gonna be still music coming from MÖTLEY CRÜE for different types of things, and still merchandise and stuff like that. We're just saying that we won't tour anymore. That's really kind of it."

During the aforementioned press conference, Neil was asked why the band decided to call it quits now after more than 30 years. "We started talking about it a few years ago," he said. "You know, we didn't want to be one of those bands that maybe have one guy left in it or somebody's brother or something like that. You know, we wanted to be — we want to go out with the four founding members of MÖTLEY CRÜE and go out on top, and leave a legacy of a band called MÖTLEY CRÜE."

All tickets and packages can be obtained via Ticketmaster.com.