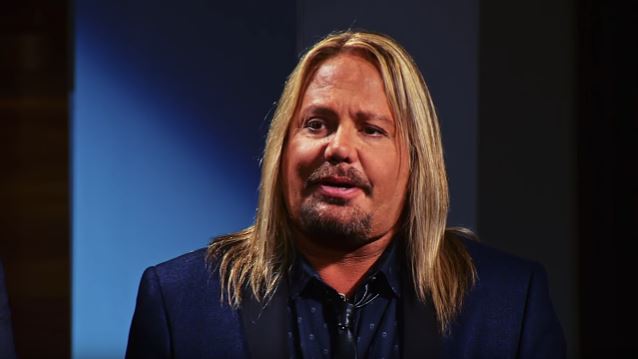 MÖTLEY CRÜE singer Vince Neil is among the celebrities competing on NBC's "The New Celebrity Apprentice", which shifts to Los Angeles for its eighth season where twice-elected California governor, successful businessman and international movie superstar Arnold Schwarzenegger takes control of the boardroom. "The New Celebrity Apprentice" will premiere on January 2 and will air weekly on Monday nights at 8 p.m.

"The New Celebrity Apprentice" sees contestants compete in teams to complete business challenges from developing an advertising campaign to putting together promotional events. The winner for the season receives a check for $250,000 for their charity while they also have the ability to win additional money for their cause in various challenges throughout the season.

"He's a different sort," Neil told Billboard about George. "We had our times together. For music fans, one of the tasks is me and Boy George do a song together. It actually turned out really good, so I can't wait for everybody to see it."

Neil who is competing for the non-profit Keep Memory Alive, helping people suffering from Alzehimer's disease, says competing on the show was an eye-opening experience.

"The hard part about the whole thing is the hours that you spend. You are up at 5 a.m. and don’t get back to the hotel at 10 o'clock at night," he said. "But everybody was so cool and got along. Jon Lovitz and I bonded. We had lunch every day and became good friends."