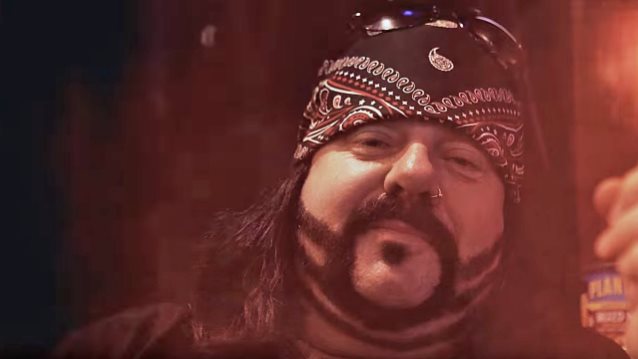 VINNIE PAUL Is Passionate About Cooking

Former PANTERA and current HELLYEAH drummer Vinnie Paul Abbott was interviewed last month on the Banana 101.5 radio station in Flint, Michigan. You can now watch the chat below.

Speaking about his long-awaited cookbook, the drummer said: "[I'm] nearly done with it. I'm getting more and more of it done as [the HELLYEAH 'We're All In This Together'] tour progresses, and I will have it done hopefully in time to release for Christmas. 'Cause everybody needs a Vinnie Paul cookbook to give their friend."

He continued: "It's called 'Drumming Up An Appetite With Vinnie Paul'. That's completely genius. It's got a picture of me sitting behind the drum set. I'm holding two big, old turkey legs; those are otherwise known as drumsticks. And it's got a lot of really cool recipes that I came up with on my own; a lot of them my mom taught me when I was growing up; and just a lot of tongue-in-cheek humor, and it's just a lot of fun. It's not real serious."

Vinnie added: "A lot of people think cooking is throwing something in the microwave. It's really not. There's a passion to it. It's like playing music. If you love doing it, you really put everything you've got into it and want it to be special, and that's what we do."

Back in 2010, Paul told the LimeWire Music Blog a little bit about his favorite dishes. "I love cooking fajitas. I'm from Texas and it's not a difficult thing to do, but a lot of people burn the chicken."

He also revealed that he was a fan of stuffed jalapeños. "I take fresh jalapeños, put cream cheese on them, maybe a little fajita seasoning, cheddar cheese on top and the key ingredient, which I learned in Australia, is barbecue sauce," he said. "Don't put hot sauce on it, just a little barbecue sauce on them. Put them on the grill."

He added, "When I have parties, I have little sandwiches. I always make sure I have two or three fresh habaneros and I only put them on one or two. There's always someone who comes running around the corner, 'Oh my god! I don't know what was in those, but my mouth is on fire! What do I do?!'

"It's fucking awesome. Somebody always gets one, but nobody knows who."