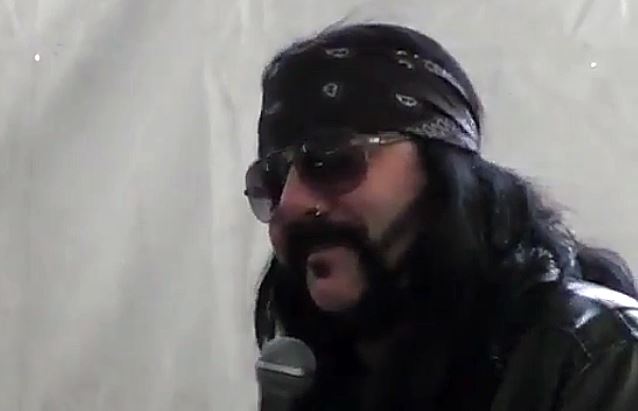 VINNIE PAUL On Returning To City Where DIMEBAG Was Murdered: 'I Felt Like It Was The Right Time To Do It'

Tina Smash and Big Ric of "Big Smash Radio" conducted an interview with former PANTERA and current HELLYEAH drummer at this year's Carolina Rebellion festival, which was held May 6-8 at Rock City Campgrounds at Charlotte Motor Speedway in Concord, North Carolina, just outside Charlotte. You can now watch the chat below.

Speaking about HELLYEAH's upcoming appearance at the Rock On The Range festival in Columbus, Ohio — which will mark his first performance in the city since his brother, PANTERA guitarist "Dimebag" Darrell Abbott, was tragically killed on stage in Columbus in 2004 — Vinnie Paul said: "It's taken me a long time to really get in the right headspace to where I feel like it was time to do it. And it wasn't anything specific; we've been offered to do it just about every year since HELLYEAH's been together. And this year, it just kind of hit me. I said, 'You know what? I think it's time for the people there to hear what we do and to go back and just do my thing and show a little love to my brother.' I know the crowd's gonna be chanting 'Dimebag!' It's gonna be huge, so it's gonna be awesome."

Asked whether he has gotten a lot of requests from Ohio people over the years to return to Columbus, Vinnie Paul said: "Not directly. I just know that every year, [the Rock On The Range organizers] were, like, 'Hey, we know how Vinnie feels about the situation. But just let him know the offer's there, that we would love to have him come play.' And so this year when it came around, I just felt like it was the right time to do it."

Dimebag was co-founder and lead guitarist for PANTERA. When PANTERA broke up in 2003, Dimebag and Vinnie Paul formed DAMAGEPLAN. On December 8, 2004, while performing with DAMAGEPLAN at the Alrosa Villa in Columbus, Ohio, Dimebag was shot and killed onstage by Nathan Gale. He was 38 years old.

In a 2006 interview with Revolver magazine, Vinnie Paul was asked if he was taking medication or undergoing therapy to deal with the pain of witnessing his brother's murder. He said: "I've had a lot of vodka. I've not leaned on any kind of pills. I don't want that, and I know Dime wouldn't want it. And I certainly don't want to tell some psychiatrist I don't know everything about my life and expect him to be able to help."

He continued: "Dime always said, 'Those are the highs and lows of rock and roll, man,' and that's the ultimate fuckin' low I've ever been through. And I still go through it, but the main thing I wanted to do is make it through on my own without any crutches. The path is real, man. Let's all deal with it."