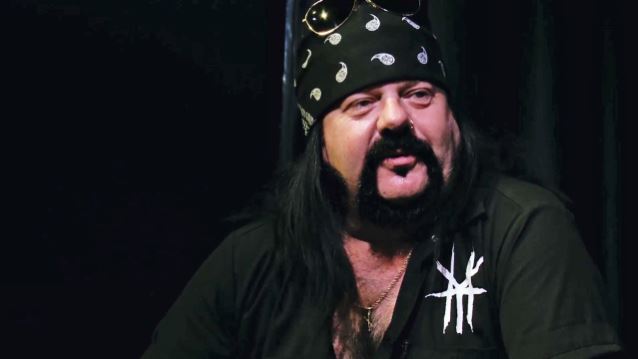 On August 2, former PANTERA/DAMAGEPLAN and current HELLYEAH drummer Vinnie Paul Abbott took part in a question-and-answer session at the DFW Acura Performance Showroom in Dallas, Texas. You can now watch video footage of the chat below.

Speaking about the bands that inspired him to become a drummer, Vinnie Paul said: "VAN HALEN [was] a huge influence on me. Eddie and Alex [Van Halen] inspired me and my brother [late PANTERA and DAMAGEPLAN guitarist 'Dimebag' Darrell Abbott] so much. It was really just unbelievable the parallels that we had between ourselves.

"I remember the first time I met Eddie," Vinnie Paul continued. "He was in town and I was off doing something and my brother was in Phoenix. And my manager at the Clubhouse [strip club in Dallas co-owned by Vinnie] calls me and says, 'Hey, man, Eddie Van Halen is in the club. He wants to see you.' And I was, like, 'You've gotta be kidding me! He's in there?' [And he says] 'Yeah.' I hauled ass over, walked into the club, and he's sitting there at the table by himself waiting on me. I came in, and we gave each other a big hug. After about… I don't know… We'd been talking maybe ten minutes, and he goes, 'You know, man?! It's crazy. We've only been talking, like, ten minutes, but it's unbelievable how much we've got in common — you and your brother, and me and Al.' And it was an amazing thing that happened. And then [DAMAGEPLAN] had to fly out and play this thing called Locobazooka in Boston [in 2004], and [VAN HALEN] had some shows [coming up], and [Eddie] wanted us to come and see him. And Eddie sent a limo to pick us up, which was very cool. And we came in, and he brought us right up on stage and hung out at soundcheck and everything. And the show was amazing. And I'll never forget. We got on the plane, and when we were flying back to Dallas, my brother looked at me, and he goes, 'Man, you know what? If this plane was to go down in a crash right now, I'd be okay with it. I finally got to meet the dude that made me wanna play guitar.' It was really special."

In a lasting sign of deep respect, Eddie Van Halen donated the black-and-yellow tape-striped guitar pictured on the back cover of "Van Halen II" to be buried with Dimebag.

Darrell's life partner, Rita Haney, spoke with Billboard about Eddie's gift to her longtime companion. She said: "I remember talking with Vinnie, trying to decide what guitar to bury him [Dimebag]. Three hours later, Eddie called to see if he could do anything for us and for Dime. We'd met him just a few weeks earlier for the first time, and Dime was ready to cut him a $30,000 check that night for one of his striped guitars, but Eddie told him he'd do one special for him. So I asked him if he'd stripe up a guitar for Darrell. He said, 'One of the red-white-and-black ones?' And I said, 'No — Darrell always said that the yellow and black was your toughest guitar!'

"When he came for the funeral, he brought his original yellow and black from 1979. He said, 'An original should have an original.'

"We were walking down the hallway of the funeral parlor, me, Eddie and John 'Bushman', who had been out with DAMAGEPLAN as a tech — he's the one who dragged Vinnie off the drum stand [the night Dimebag was murdered] and threw himself on top of him to protect him. We got to the room where Dime was, and you could see [Abbott's] feet through the doorway. Eddie said, 'I can't go in there, I can't see him like that — I want to remember him like he was that night I met him.' I said, 'That's okay, Eddie — we'll take it to him,' so John and I went in and placed it with him."

In an interview with Metal Monthly, Rita explained further: "We had just seen VAN HALEN in Midland, Texas, a few weeks earlier, and that was the first time Dime ever got to meet Eddie. They hung out before and after the show. Dime even got to play Eddie's rig at soundcheck. He was like a kid in a candy store — the way his eyes were lit up. He told me later in the limo — which Van Halen provided — 'How cool is that? Anyway, he leaned over and looked me right in the eyes and said, 'If I died tonight, it wouldn't matter, 'cause I've done everything now, I've met Eddie Van Halen!' and he had the biggest smile on his face… he was so happy!

"When Ed came in at the viewing, he had the guitar, but it wasn't the guitar we expected… he told Vinnie and I that 'Dime was an original and only an original deserves the original!' He popped open the case and there it was… his original '79 still with the rusted set of strings on it! It was so amazing!!! I took it in to Dime and I said, 'See, baby, you didn't get a replica! You got THE one,' and I gave him a kiss on the forehead and placed it in there with him… Ed was awesome and I thank him still!"