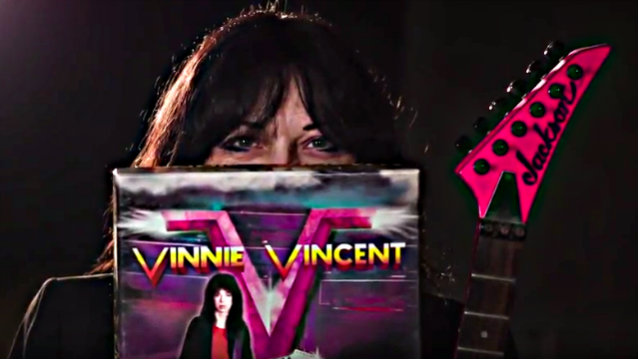 VINNIE VINCENT: 'I Love And Respect GENE SIMMONS Like A Brother'

Ex-KISS guitarist Vinnie Vincent says that he wishes his former bandmates Gene Simmons and Paul Stanley "nothing but the best."

Vincent replaced lead guitarist Ace Frehley in 1982 and played with KISS for two years. He left the group on bad terms, and later claimed Simmons and Stanley owed him royalties for his work on the group's 1983 album "Lick It Up".

In a brand new statement released to BLABBERMOUTH.NET, Vincent said: "I love and respect Gene Simmons like a brother, and have nothing but the fondest of memories working with him and Paul Stanley. Ours was a very special chemistry. We made one hell of a great band, and the magic we made together is timeless.

"I am proud of our work and the songs we wrote that appeared on the 'Creatures Of The Night', 'Lick It Up' and 'Revenge' albums that became KISS classics, and are staples of their live shows to this day. We brought happiness to the fans with performances and songs that will live on.

"I am appearing in person at the Atlanta Kiss Expo to celebrate KISS, embrace our music and our time, and share good will with the fans. And for all of the above, I wish both Gene and Paul nothing but the best."

Simmons recently told The Aquarian Weekly that he would never work with Vincent again. "He's a very talented guy," Gene said. "Everybody's got their troubles in life. You can't fix everything. I'm a big supporter of his talent. You know, go with god. Enjoy life, be happy. But I don't need more dark clouds over my life. It's nice and calm. Eric [Singer, KISS drummer] and Tommy [Thayer, guitar] have been with us for a very long time, and it's professional to the highest degree. Everybody is happy to be together. Everybody shows up on time. There's no, 'The dog ate my homework.' None of that crap.

"When you use drugs and alcohol and other bullshit things, it's everybody else's fault," Simmons continued. "You're always the victim. You never take charge of your situation, and I'm sick of it. I don't tolerate any of that. I won't have any of those losers around in my life. That includes regular people too. If somebody I work with in other areas drinks, they're gone. By the way, they don't care about you. They just want what they want."

After Vincent sued Stanley and Simmons for "Lick It Up" royalties, a federal judge in Los Angeles ruled against the guitarist and awarded the KISS defendants about $66,400 in attorney's fees and $15,400 in costs.

After running into into Simmons at a recording studio and reportedly apologizing for causing KISS all the grief while he was a member, Vincent was brought back into the KISS fold to co-write "Unholy", "Heart Of Chrome" and "I Just Wanna" for the band's 1992 album "Revenge". However, once the record was released, "Vinnie was up to his old tricks again," Simmons told Rolling Stone. "He reneged on a signed deal we had made and decided that he wanted to renegotiate. He eventually sued us and lost. As far as I was concerned, he was persona non grata forever."

"It's a shame," Simmons said. "He's talented beyond most people that you'd meet, but you get to sleep in the bed you make."

In May 2011, Vincent was arrested and with aggravated domestic assault after allegedly roughing up his wife, Diane Cusano, at their home in Smyrna, Tennessee. He spent the night in jail and was released on $10,000 bond the following morning.

In a statement released after the arrest, Vincent said: "Please don't believe everything you read. I would never hurt anyone — ever. What has been reported is an absolutely inaccurate depiction of the events that occurred that evening. When it's time, the truth will be known."

In January 2014, Diane Cusano passed away due to conditions stemming from chronic alcoholism. She was 47 years old.

In recent years, Vincent has been the subject of a number of unsubstantiated rumors about his gender identity, including that he has been cross-dressing and that he has undergone a sex change.

Earlier this year, Vincent was the focus of a Swedish TV documentary called "KISS Och Gitarristen Som Försvann" ("KISS And The Guitarist Who Disappeared") which apparently tried, unsuccessfully, to track Vinnie down and get him to sit down for an interview.

Excited to post Vinnie's first message to everyone here and on the website. We'll have A LOT more updates next week too!...