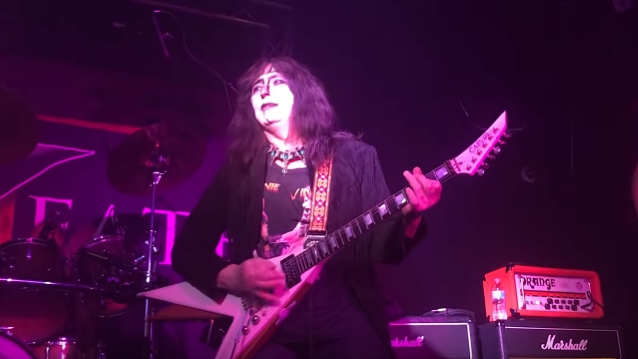 Former KISS guitarist Vinnie Vincent joined FOUR BY FATE on stage last night (Tuesday, October 30) at the pre-Kiss Kruise party at the Hangar Nightclub in Miami, Florida to play three KISS songs: "Lick It Up", "I Love It Loud" and "Cold Gin". Fan-filmed video footage of his performance can be seen below. FOUR BY FATE features members of FREHLEY'S COMET, CHEAP TRICK and SKID ROW.

As he did at this past weekend's Chiller Theatre event in Parsippany, New Jersey, Vincent donned a variation of the "Ankh Warrior" makeup for his FOUR BY FATE guest appearance.

Vinnie's official comeback concerts will take place December 7 and December 8 in Memphis, Tennessee at the Theatre at Graceland. They will mark Vinnie's first full-blown return to the stage in over 30 years.