Former KISS guitarist Vinnie Vincent's performance at the "Speedballjamm", which was scheduled to take place next month at the S.I.R. Soundstage in Nashville, Tennessee, is no longer being advertised on his web site.

The "Appearances" section of VinnieVincent.com contains no mention of the June 7 event, but includes the following message: "Come see the legendary Vinnie Vincent in person! Vinnie will be appearing at a variety of events for musical performances, meet and greets, autograph sessions, photo ops, and more! Check the listings below for an appearance in your area!"

Vincent's "Speedballjamm" appearance was being billed as an intimate event, with only 60 VIP tickets being made available at the cost of $300 per ticket. The performance was supposed to see Vincent backed by his handpicked musicians, Mike Weeks and Chuck White.

Less than a week ago, fans reported via social media that fewer than a dozen tickets had been sold for the "Speedballjamm".

A representative for S.I.R. confirmed to Ultimate Classic Rock that the show won't be happening at the venue, explaining that it had been pulled from the schedule this morning and that its only involvement with the event was to rent the space to Vincent.

Earlier in the year, Vinnie canceled his original comeback concerts. which were supposed to take place February 8 and February 9 in Nashville, due to a dispute with the promoter.

Robert Fleischman, a former member of JOURNEY and Vincent's post-KISS band VINNIE VINCENT INVASION, was supposed to sing for Vinnie but abruptly pulled out of the project in November, saying that he was unhappy about elements of the production.

Derek Christopher, the promoter of Vinnie's comeback concerts, said that he was "shocked" by Vincent's decision to scrap the shows two weeks before they were scheduled to take place.

Vincent's plan for his comeback has publicly changed several times. In the initial announcement, the show — which was originally slated to happen in November — was described as a true solo gig with Vinnie singing and playing songs from his career on acoustic guitar and telling stories about the old days.

Last summer, KISS bassist/vocalist Gene Simmons suggested in an interview that Vincent was "his own worst enemy" and expressed his doubt that Vinnie would successfully relaunch his career.

"There's something called the classic failure mechanism, which I was told by doctors and everything — I'm not saying he is one," Simmons said at the time when asked about Vincent's attempt to trademark the name "Vinnie Vincent's Kiss". "But there are people who simply cannot handle when things are starting to go their way — success — so they torpedo it by making stupid decisions to make sure they don't succeed, so they can deal with that."

Vincent — who was a member of KISS when the band publicly "unmasked" in 1983 — made several public appearances last year after spending the past two decades out of the public eye. 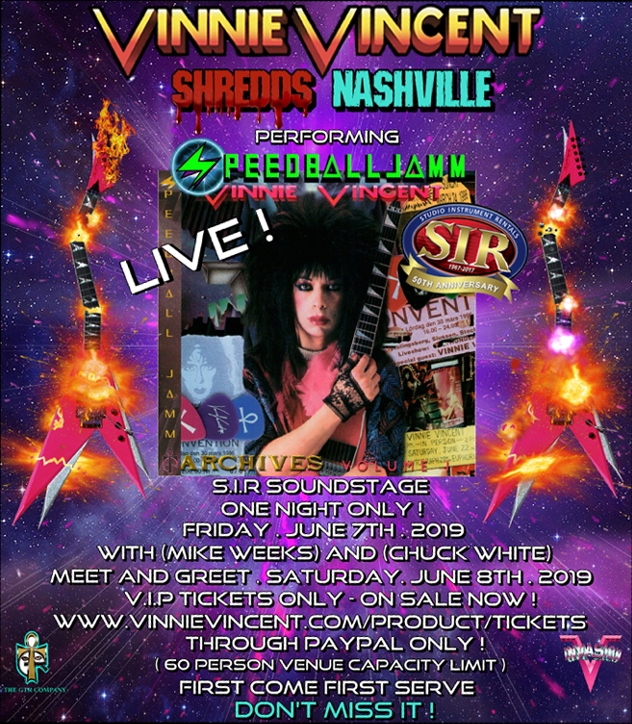