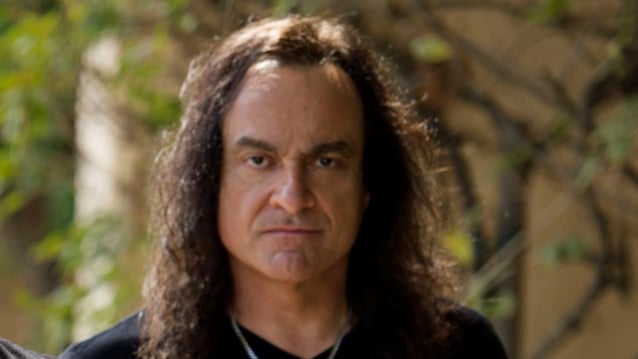 VINNY APPICE On Bands Doing Farewell Tours: 'Sometimes It's The Time To Give It Up And Actually Retire'

In a recent interview with WSOU, veteran rock drummer Vinny Appice (BLACK SABBATH, DIO, HEAVEN & HELL) spoke about the spate of iconic rock and metal bands announcing farewell tours in recent years, including KISS and BLACK SABBATH. He said: "I've heard a lot of [farewell-tour announcements], and then you find out that they're still touring. Not KISS, but other bands. I think the SCORPIONS were doing a retirement tour 10 years ago. It's funny, yeah. But sometimes it's the time to give it up and actually retire, because [after] doing it for so many years… I think with KISS, it's easy, because you could probably continue with a great show — with just a KISS show, and they're not even in it, and it's just an amazing show, with all the theatrics and all the effects and all the great music. But that's pretty cool that they're announcing it, and if that's true, everybody, go check it out one last time."

According to Vinny, retirement is usually an age issue, with many artists choosing to call it quits while they are still competent performers.

"I don't think anybody thought this music was gonna last this long," he said. "Back in the '70s, they probably thought the music was gonna last 10 years or something; I don't think anybody thought all these bands were gonna last so long — 40 years later, or more. So it's kind of sad that the bands are going away, but that's just bound to happen. And new music is gonna always continue, so hopefully there'll be new bands to grab on to and become a fan, things that touch people and music that touches people. But, yeah, it's the time where all these bands are kind of the same age — there's KISS; there's Ozzy [Osbourne]; [BLACK] SABBATH are done; [LED] ZEPPELIN's done; AC/DC, I don't know… they're half done. QUEEN… And luckily, they made some legendary music and the music will live on probably forever. And some people are dying; it's just getting at that age. But I'm not dead yet, and I'm still going for a little longer. [Laughs]"

Under the moniker APPICE, Vinny and his brother Carmine released "Sinister", their first joint studio album, in October 2017 through SPV/Steamhammer.