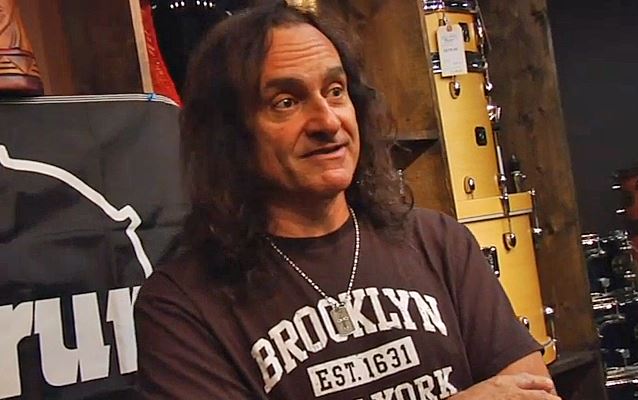 VINNY APPICE On BLACK SABBATH, LAST IN LINE And Playing With Brother CARMINE

The Rockpit: What was it like working with your brother [Carmine Appice] on "Drum Wars"?

Vinny: Well, we started "Drum Wars" a couple of years back, but back in the Nineties, we did a couple of drum clinics for a drum company. It was very successful and we had a lot of fun with it, but it was only for about a week, and then believe it or not, we didn't have time to do any after that. Time went by, and we started talking about it a couple of years ago, and it started off more as a drum clinic, and we did a couple of those, but then you can't really do those in a club or a theatre — a clinic has to be sponsored by a store or a company. So then we started thinking, how can we incorporate some music in that, in what we're doing? And we came up with "Drum Wars". So it's been a fantastic time, we get along great, and we have a lot of fun. We work together really well, and what we do is we get three or four kids from wherever, from the States or Canada, and we also did three weeks in Europe, and we get a band from that area that will stick with us, and we'll play about four or five DIO/SABBATH songs from my history, and four or five songs from Carmine's history, and in between all that a couple of drum battles, a couple of drum duets, really cool stuff, but with two drummers now, we play some of the songs together, some separately. It's really exciting, people are really getting in to it, there's been a great response, so we'll be doing a lot of that next year too. We have a great time, and it's really cool to work with my brother.

The Rockpit: It was great to see you out with LAST IN LINE [featuring original members of DIO alongside singer Andrew Freeman] as well, the band that made that classic album "Holy Diver". Have you got any plans to take that further, and maybe tour outside of the U.S.?

Vinny: Yeah, we're going to do some more dates next year. That started off as just some fun with some cool stuff with Jim [bassist Jimmy Bain] and Vivian [Campbell, guitar] and Claude [Schnell, keyboards]. We had some time off, and got together to jam, and I recommended the singer, Andy Freeman, a good friend of mine. He sang with me with George Lynch on a tour we did, so he came down and tore it up. We ended up doing three or four shows in L.A. and Vegas, and we did the big Loud Park festival in Japan in October, and that was incredible; people were going crazy. We know those songs, we wrote those songs, and we have a singer that sings his ass off with passion; he's not trying to be Ronnie [James Dio], but he just really kicks it! It's going really, really good.

The Rockpit: Ronnie was a legend; I loved the guy. There was a story on the Internet that at the first [LAST IN LINE] gig in California that there was seen an apparition of Ronnie. Was there any substance to that?

Vinny: No. You know what?! That was just someone who was, let's say, a little high energy, a little over-enthusiastic, and he posted that [on the Internet]. Yeah, come on — an apparition, nothing like that happened. Come on!

The Rockpit: With the recent SABBATH reunion as well, and the new album, were you approached by the guys to have a part in that?

Vinny: No, I wasn't. I'm still in touch with Tony [Iommi, guitar] and Geezer [Butler, bass], myself, but they never offered anything, and I don't ask; I don't do that. They have my number and my e-mail. It's understandable [why they wouldn't have asked me]. We did HEAVEN & HELL for three or four years with Ronnie, and then Tony and Geezer are together, and Ozzy [Osbourne] comes in. He [wouldn't have known] what band he was in; he [would have been] a little confused.

The Rockpit: Taking it all the way back for you, what was it that started you playing the drums? Was there a defining moment?

Vinny: I got playing because of my brother Carmine; he's 11 years older than me, so he always had bands in the house, rehearsing when he was in his late teens. I was just a youngster, and that was my entertainment; I'd sit down and watch a band in my parents' living room or basement, which was in New York. I was totally inspired — all the amps, the wires, the drums. It was cool, and that got the bug going, and that got me started.

The Rockpit: Did he pressure you into playing the drums, or was that just the instrument you naturally gravitated to?

Vinny: Naturally. Since the drums were in the house, I just started banging on them. Then Carmine became successful, and I never even thought about it. I was, like, I'm going to play drums too.

The Rockpit: If you could have been a fly on the wall for the creation of any album, at any point in time, to see how it all came together, what would it be for you and why?

Vinny: I would probably choose any of the early [LED] ZEPPELIN records, or one of the major BEATLES albums. I have a couple of friends who have some of the multi tracks of some of THE BEATLES stuff, and it's incredible; you just listen to one instrument, and though they had the multi-track, they didn't have a lot of tracks. Sometimes it's just drums, with some background harmonies on the same track. You listen to this stuff and it's just amazing; it doesn't sound like anything, but when it's all together, it's amazing!