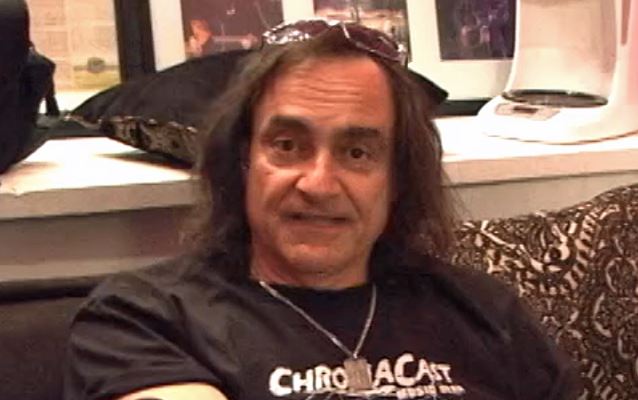 Asked to recount a wild story from his years on the road, Vinny said: "One time with BLACK SABBATH, we were playing the song 'Black Sabbath'. Whenever something weird happens, it's during that song. It's weird. The weather would start… So were playing in England… Stafford… Ten thousand people, sold out, in an arena. Back then we used smoke during the show, and they put dry ice in a big oil drum barrel full of water. That's how you created smoke back then. Now it's like a little box… Back then, you had to have these barrels and they'd throw the ice in and hoses. So we were playing the song, and we were in the low part, and they put the ice in and the freaking thing explodes behind me. So the water goes up 25 feet in the air, and everybody's, like, 'Yeah!' thinking that's part of the show. But it exploded, and all the water and the ice comes down on the drums and me. And they go, 'Holy shit!' And the drums are, like, [makes thumping sound]. And the band's laughing; Tony [Iommi] loved it, Ronnie [James Dio] was laughing, Geezer [Butler]… It was hilarious. And I'm sitting there, and then all of a sudden, my ass is burning. I was, like, 'What the fuck?' Dry ice went down the crack of my pants, and it's burning, 'cause it sticks to your skin. And I'm, like, 'Oh, shit!' Ten thousand people, [and I said], 'I'll be right back.' I went off the stage to the medics, and the stuff was stuck to my ass. The medics were two women. 'Okay, pull your pants down. We're gonna take that off.' So we all came off stage. They had to wipe up the stage and all that. And they put cream on me, they put bandages. They're asking me, 'Do you wanna go? Can you play the rest of the set? If you can't, cancel it.' The place is sold out. I said, 'Of course.' So I went up with a pillow. And we continued and played the whole set."