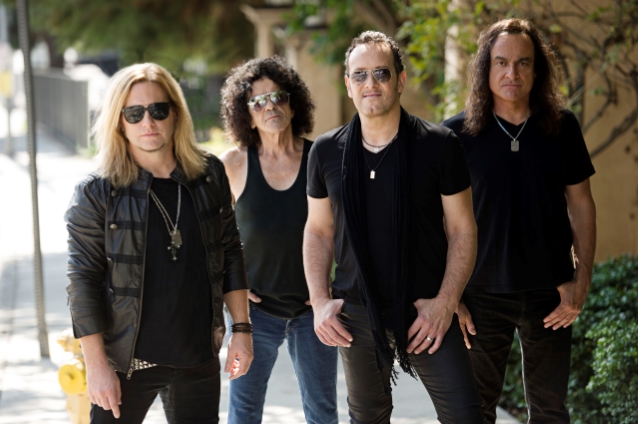 During a brand new interview with "The Classic Metal Show", legendary drummer Vinny Appice spoke about the tragic January 2016 passing of his LAST IN LINE bandmate Jimmy Bain aboard the "Def Leppard Hysteria On The High Seas" cruise.

The 68-year-old bassist, who had also played with DIO and RAINBOW, had been found dead in his cabin. The cause of death was later revealed to be lung cancer.

"It was shocking and it was hard," Vinny said about his friend's passing (hear audio below).

"Before we did the cruise, the week before, we rehearsed with Jimmy, and he said he had pneumonia. He looked pretty sick — skin color and everything — but he made it to rehearsal. He sat down — he didn't stand up — we played for three hours, four hours for three or four days. And he did that; he was a trooper. Then he got on the plane. Meanwhile, he's dying of cancer. He got on the plane, made it to Florida, and we were scheduled to play on Sunday, so the cruise left on Saturday. And right before DEF LEPPARD was going on, one of the girls came down crying: 'It's Jimmy! It's Jimmy!' And for some reason, I knew when I saw that. It just came to me that this is the day Jimmy's passed. And that's what happened. And I went up to check it out. I saw Jimmy in the room."

According to Appice, Bain "went out as a rock star. He was all dressed up," he said. "He had velvet pants on. He had his chains on. He had his rock shirt on. He rocked out to the end. God bless him. He didn't wind up in the hospital getting treatment. He wound up, to the very end, rocking out — pretty much."

Bain, along with Appice and guitarist Vivian Campbell, was part of the original DIO lineup, which reunited in 2012 alongside singer Andrew Freeman to form LAST IN LINE.