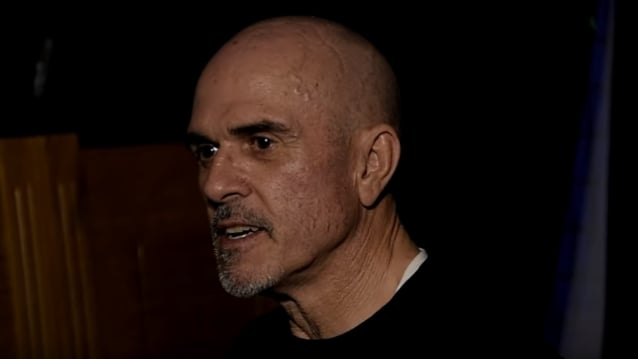 Mosh Mag conducted an interview with members of San Francisco Bay Area thrashers VIO-LENCE prior to their April 14 show at the Oakland Metro in Oakland, California. You can watch the entire chat below. A few excerpts follow (transcribed by BLABBERMOUTH.NET).

On what the future holds for the band in the wake of their recent comeback shows:

Perry Strickland (drums): "I think we really just want to play together. Have fun, go back to some really, really old-school basics. Mr. Rockstar over here [Phil Demmel, guitar] has probably done everything on the face of the earth. I've had my little stints, and I think, for us, it's just a matter of getting back to playing, having fun, a lot less stress, throw the stuff up onstage and try to have some fun because some of us who haven't played in 16 years still make mistakes. [Laughs] Mostly Dean [Dell, bass] and I. It's just about having fun and laughing it off and trying to get back to having a good time, and we seem to be achieving that. We're just going to enjoy that, and what happens just happens."

On whether VIO-LENCE would attempt to become a full-time band if their comeback shows continue to do well:

Phil: "My feelings on it is we're just taking it as it comes."

Dean: "We're going to play one show and see how it goes."

Phil: "Then it sold out and we said, 'We're going to do two.' [We've got a show in] Belgium, we're headlining a fest in Illinois. We've got two shows in New York. We're doing a couple of shows with SACRED REICH — one in L.A. and one in Phoenix, their hometown. The L.A. show sold out in a day. Pretty insane. I just enjoy playing with these guys and everybody's telling me, 'Oh my god. You're smiling onstage again.' It's because I wasn't allowed to before. That might be an exaggeration."

Perry: "We went through a few stages where it took us a month and a half to feel each other out because we all were treading very lightly with each other to make sure we didn't fall back on to… The 2000 reunion almost felt like a bad drug habit. It's, like, 'Here am I, doing this crap. It's bad for me and I don't like it.' This is definitely not that, because I work 10 hours a day. I'm thinking about practice all day. I'm high on life. I wasn't before. To work 10 hours a day and think about practice all day, yeah, I'm pretty psyched to go jam. That's something I haven't felt in probably 20 years."

On the members of VIO-LENCE enjoying themselves onstage:

Phil: "The idea of these shows came up, and it's, like, 'Are we going to do them?' I took the reins a little bit. I wanted it to be a Ruthie's [Inn] show. I wanted it to be no fucking attitudes, no fucking egos or, 'You should have done the Warfield.' No. We got 2,000 people on paper; I would say there was 1,200 people here last night. The doors were open backstage and people were just walking — it was fucking Ruthie's Inn 1986 last night. It was my favorite VIO-LENCE show ever. I felt it. I felt that old-school family vibe. All of our friends were here. There was no stress after the afternoon, when our guitar disappeared for a few hours. After that, no stress. Playing with these guys, cords getting tangled and people stage diving and mic stands over here… it was awesome."

Perry: "That was just that level. We haven't brought up the Sean Killian factor yet. What Phil just described is what we all felt normally. Then you bring in the Sean Killian factor of this monster. Sean's will to not give up and come back, it was awe-inspiring. There are days where I'm just really tired, but it's, like, 'Yeah, Sean's here. He made it.' What are you going to say? You're not going to say a damn thing. You're going to get up there and give it up your best. To see Sean up there, I was in tears."

Dean: "It's been an emotional roller coaster for me as well. I work nights, I work weekends. I said, 'When are we gonna practice? I don't know when I can.' It's been trying, but it's been all worth it in the long run."

On the health of Killian, who underwent a successful liver transplant surgery in March 2018:

Perry: "If anything, he was oddly calm. I think we were more excited. He was, like, 'Yeah, that was pretty cool.' That was his coping mechanism to maintain. Me, I was losing my shit."

Phil: "He felt his air was good. He coped well up there and through the elements. It was funny. I didn't know the setlist and [it] was so 1986. It was so good."

Sean: "It took six months to recover to actually go and walk the dog for a couple of miles. The more we walked, the more distance we walked. The dog was getting tired."

On whether Killian was the catalyst for VIO-LENCE's reformation:

Sean: "When Phil parted ways with MACHINE HEAD, I sent him a text saying, 'Hey, we should play a show.' I got back this…'VIO-LENCE' in capital letters with 50 million question marks. His first thought was, am I capable of doing it? [And I said] 'We've got four months [until the first show] and I'm feeling good now and I'll feel even better then.'"

Dean: "That's the first thing I said to [him]: Are you sure you wanna do this now? We can't wait another two? You wanna take another two? He's, like, 'Fuck that.'"

On whether Killian feels like he has a new lease on life:

Perry: "The older you get, you know you're getting close. You better take advantage of it. We're not 20 anymore. You can't get high and go take a nap."

Sean: "I have a new opportunity."

Although current MACHINE HEAD frontman Robb Flynn was part of VIO-LENCE's classic incarnation and played on the band's debut album, "Eternal Nightmare", he wasn't contacted about doing the comeback shows.