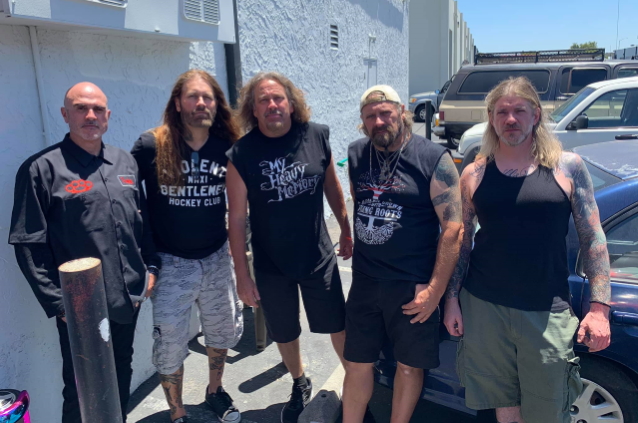 "We did a cover song that's gonna come out on the 20th of this month," he said (see video below). "It's a band from the Bay Area that we covered one of their songs — a punk band. And we did a video for it. And so Metal Blade Records is gonna get it out on Spotify and iTunes, and we'll put it out on YouTube as well. That's coming on August 20th."

Asked by Poisoned Rock what Gustafson's addition to VIO-LENCE has brought to the band's sound, Killian said: "Most of what we're writing is just Phil and I right now. It's just Phil, Perry and I in the rehearsal studio, and we've been writing. We've got three songs now that we were able to demo a couple of weeks ago so we can sit down and listen to it and make adjustments to it.

"Bobby, he's just a solid guitar player, and he fits in really well with us," he continued. "But yeah, he'll be contributing in the future. But on this five-song EP, it's something Phil and I, we wanted to do. We've been talking about it since the middle of last year, [before] we got Bobby in the band. It's something that we wanted to get out. And then, when we do a record afterwards, we'll definitely be having Bobby contribute. But as far as playing live, he's just a great guitar player — he's a great musician and a great presence on stage. We kind of needed that."

"We've got three originals done," he said. "We had a cover song that we were working on to play at a local live show, and that got canceled. I wanted to have some content, [so I said], 'Let's just go in and record this song. Let's do a video — just have something to kind of fill this void.' 'Cause we don't write all that fast. This is an important release for us. It's been 30 years since we've put something out. We wanna make a statement, so we want it to be good. In the interim, I spoke with [our record label] Metal Blade, and everybody was on board to do this fun little video."