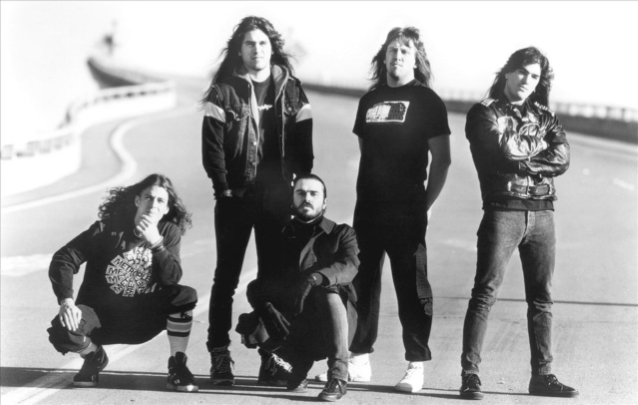 VIO-LENCE To Reunite For One Show In Oakland; 'Eternal Nightmare' To Be Performed In Its Entirety

San Francisco Bay Area thrashers VIO-LENCE will reunite for a one-off concert on Saturday, April 13 at the Oakland Metro in Oakland, California. The band will perform its debut album, "Eternal Nightmare", in its entirety at the show, along with "other surprises."

Produced by John Cuniberti between February and April 1988 at Music Grinder and Alpha & Omega studios in Los Angeles and San Francisco, respectively, "Eternal Nightmare" received critical acclaim for its mixture of brutal, speed-thrash riffage and a lightning-fast barrage of lyrics. The epic 1988 debut, along with blistering live shows, gained VIO-LENCE national tours with TESTAMENT and VOIVOD. One track, "Torture Tactics", was recorded during the sessions but deemed too lyrically controversial for inclusion on the album.

VIO-LENCE's lineup on "Eternal Nightmare" included Killian, Dell, Strickland, Demmel and Robb Flynn, who has fronted MACHINE HEAD for the past two and a half decades.

Demmel landed in MACHINE HEAD in 2003, about a decade after the breakup of VIO-LENCE. He left MACHINE HEAD at the end of the band's fall 2018 North American tour, explaining in a statement that it was "simply time" for him "to step away and do something else musically."

For the past two years, Killian has been battling stage four liver cirrhosis, which was caused in part by a genetic condition called hemochromatosis.

In January 2018, members of TESTAMENT, EXODUS and FORBIDDEN performed at a benefit concert for Killian at The Midway in San Francisco, California. The event concluded with a performance of the VIO-LENCE classic "World In A World" featuring four-fifths of the band's classic lineup — Flynn, Demmel, Strickland and Dell, with Flynn handling lead vocals. (Killian could not perform with the other members due to his health condition).