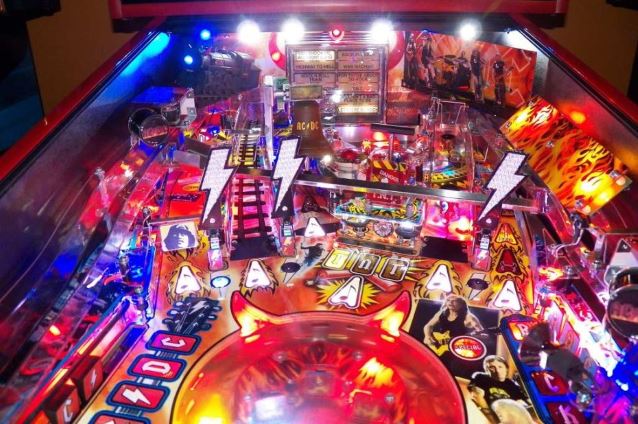 Stern Pinball, Inc., the world's oldest and largest producer of arcade-quality pinball machines, proudly announced today the addition of AC/DC to The Stern Pinball Arcade, available on Oculus Gear VR. The newest game honors one of the most iconic rock and roll bands the world has ever seen, allowing players to virtually rock out to their favorite classic hits.

With the virtual reality (VR) version of The Stern Pinball Arcade, players will be able to experience rock and roll like never before, while providing a fun, immersive pinball experience. Based on digital recreations of ever-popular Stern Pinball titles, additional titles available in the Stern Pinball Arcade include Star Trek, Ripley's Believe It Or Not, Starship Troopers and Mary Shelley's Frankenstein and now with the release of AC/DC, the virtual arcade is ready to rock.

"The combination of rock and pinball can't go wrong," said Gary Stern, chairman and CEO of Stern Pinball, Inc. "With the introduction of the virtual reality version of AC/DC pinball, we've put an innovative and interactive spin on our much beloved pinball game while playing tribute to one of rock and roll's most influential and memorable bands."

The Pinball Arcade has been downloaded over 20 million times across mobile platforms, PC and consoles.

Pricing and availability: The Stern Pinball Arcade is free to download in the Oculus store and comes with Mary Shelley's Frankenstein.

The Stern Pinball Arcade will also be released on more platforms this fall including; Oculus Rift, PS4, Xbox One, Wii-U, Steam (PC/MAC), iOS and Android.

All of Stern's pinball games are crafted by hand and assembled by Stern's expert team. A broad range of players enjoy Stern's games from professional pinball players that compete in high-stakes international competitions around the globe to novice players who are discovering the allure of the silver ball for the first time.

To join the fun and learn more, visit www.sternpinball.com.