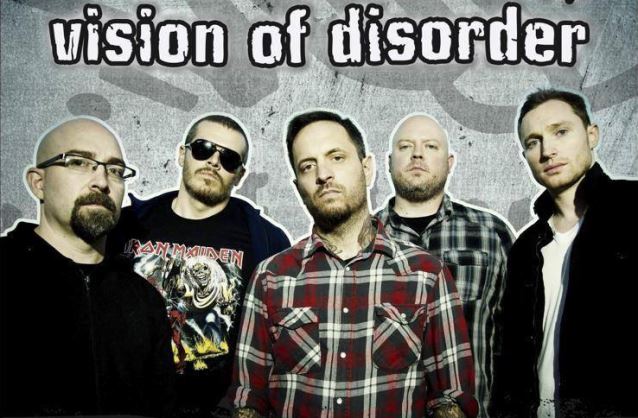 Rick Horton and Lance Ricci from The Metallic Onslaught conducted an interview with vocalist Tim Williams of hardcore/metal veterans VISION OF DISORDER (a.k.a. V.O.D.) after the band's October 19 performance at Montage Music Hall in Rochester, New York. You can now watch the chat below.

VISION OF DISORDER's latest album, "The Cursed Remain Cursed", was released in September 2012 via Candlelight Records. The CD was produced by Will Putney (SHADOWS FALL, SUICIDE SILENCE) and mixed by Cameron Webb (MOTÖRHEAD, SOCIAL DISTORTION).

Lyrical inspiration for "The Cursed Remain Cursed", as detailed by Tim Williams, came from a personal place. "There was a lot going on in my life at the time we began writing songs for the record and I had a lot to reflect upon," he revealed. "Looking back over the past few years, I have had to make some difficult decisions. There were things that needed to change. Some things die quietly, while other things take years to pass.. Your life is what you make of it, to live is to learn." He adds, "Some songs came very easy, like 'Skullz Out'. Songs like 'Loveless' and 'Set To Fail' took a little bit more effort because they were already saying something musically, so I had to work extra hard to push the vocal over the top."