Austrian symphonic metallers VISIONS OF ATLANTIS have announced the addition of singer Joanna Nieniewska (pictured below) to the group's ranks. According to the band, "This 20-year-old Austrian girl offers a wide range and a strong soprano combined with a great natural feeling for vocal harmonies."

A short interview with Joanna conducted by VISIONS OF ATLANTIS' official web site follows below.

Q: First of all, how do you feel being aboard the VISIONS OF ATLANTIS ship now and what were your first impressions of the other members?

Joanna: I've been welcomed very warmly by the others. I feel great, but I think I also haven't realized it a 100 percent yet. But this, of course, will be different when the first gigs with the guys are on their way. But the more we're working on the new song material, the more familiar it becomes to me to be a part of VISIONS OF ATLANTIS.

Joanna: When the band was looking for a new singer, they have received demo CDs and MP3s by many other singers, and at the same time they were also looking within the scene to find talented voices who have already performed in other bands. So, one day, Martin [Harb, keyboards] was asked to visit the rehearsal of my old band and this was the first time he heard me singing. And well, apparently he really liked what he heard because a few weeks later I was asked if I would be interested to come to an audition. They've sent me the songs they wanted to hear, I sang …well, and now I'm here and very happy about it.

Q: How far improved are the new songs, maybe you can tell us a few details about the whole songwriting process or how they might sound? Have you already been involved in the songwriting for the forthcoming album or was everything already fixed for you when you joined the band?

Joanna: The songwriting process is already finished, now we're working on the arrangements, the details and some fine-tuning of the material. I was really involved in the whole process and I'm also working on vocal lines which were not dictated to me but more or less proposed by Martin, and Mario [Plank, vocals] in some cases. To talk about the songwriting: The direction is to offer a broad horizon of the VISIONS OF ATLANTIS trademarks which will be now extended by some very personal influences which are brought into the songs by the different characters of the band. I can tell you that we'll have songs with harder intensity and rougher sound but also some more epic and emotional creations. For those who are more into the calm side of VISIONS OF ATLANTIS, we'll also include ballads on the new album again. Furthermore, Martin wrote a second part of "The Poem" and with the second part we want to bring the story of the first song to an end. The rest should be a surprise until then but there'll also be a premiere within VISIONS OF ATLANTIS history, but so far I'm afraid I'm not allowed to tell you more about that.

Q: Do you also play any instrument or do you consider yourself just as a 100% singer?

Joanna: I play guitar and also tried some other instruments, but within the band I only prefer singing in order to focus fully on the vocals and my performance. From my point of view, it is not that easy if you also have to play guitar or something else.

Q: Have you got plans to join the songwriting for upcoming releases? If yes, in which way and what musical influences can we expect within your creative side?

Joanna: Yes, I'd like to play a little part in the songwriting in future but mainly I'm really satisfied with the work which is done by the others where I'm actually not excluded at all. Altogether, it's also really cool to bring vocal lines and some other ideas into already written frames and basic song structures. When it comes to my musical influences it's hard to classify because I'm fond of many genres and bands but primarily I prefer musicals and gothic metal.

Q: What are your personal [short-term] or [long-term] future plans with VISIONS OF ATLANTIS and which impressions and experiences you'd like to make or you think you're gonna make?

Joanna: First of all, I'm looking forward to recording and then releasing the album with the band. Touring with the guys would be also great to promote the new album. I think it will be great fun to go on stage with the others, talking to fans, having a cool time and hopefully doing a good job for the people who are listening to our music.

Q: The last words are yours: What would you like to tell the fans of VISIONS OF ATLANTIS?

Joanna: I'm really looking forward to playing my first gigs with the band and to meet all of you on tour and hopefully to have time to talk and to have a drink together. But, above all, I hope that you are pleased with my voice and I'd like to tell you that I'm constantly on the forum from now on and it would be cool to get in contact with you, talking and sharing cool moments. And if the fans welcome me just as half as nice as the band has done, it will be a great time!"

VISIONS OF ATLANTIS in 2007 parted ways with the group's Minnesota-based vocalist, Melissa Ferlaak, and her now-husband, guitarist Wolfgang "Wops" Koch, due to "musical differences." As a result, the band's previously announced participation in the KAMELOT European tour was cancelled. Koch has since been replaced by the returning guitarist Werner Fiedler, who was responsible for much of the songwriting on the group's first two records.

VISIONS OF ATLANTIS's latest album, "Trinity", was released in May 2007 via Napalm Records. The CD was recorded at Dreamscape Studios and was mastered at Finnvox Studios in Helsinki, Finland. The CD's cover artwork was created by Anthony Clarkson, who has previously worked with BLIND GUARDIAN, HYPOCRISY and EXODUS, among others. 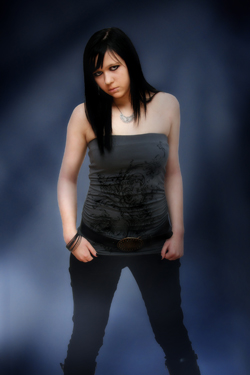