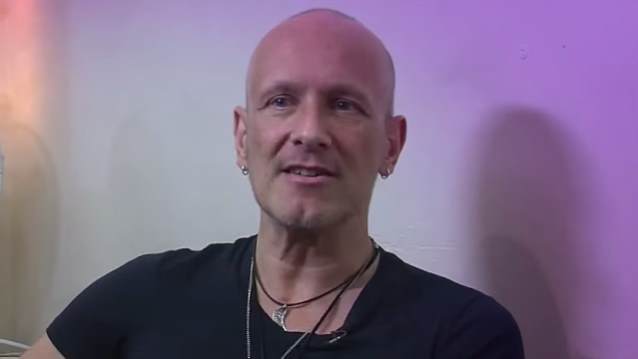 On April 22, Tyson of the 98.7 The Gater radio station in West Palm Beach, Florida conducted an interview with DEF LEPPARD and LAST IN LINE guitarist Vivian Campbell. You can now listen to the chat below. A couple of excerpts follow (transcribed by BLABBERMOUTH.NET).

On the recording sessions for the debut album from LAST IN LINE, the band featuring Campbell alongside fellow founding DIO members Vinny Appice, Jimmy Bain and Claude Schnell, plus singer Andrew Freeman, who has previously fronted HURRICANE and LYNCH MOB:

Vivian: "[April 22 was] the first of four days that we have to cut new tracks [with producer Jeff Pilson, former DOKKEN/DIO and current FOREIGNER bassist], which is the initial installment for what will be the LAST IN LINE record. So that's really, really exciting. The way the music just comes together when Vinny Appice and Jimmy Bain and myself just get in a room and start playing, it's very, very effortless. And it sounds really classic, it sounds just like 'Holy Diver'-era stuff. Big excitement."

On when he expects to LAST IN LINE's first CD to see the light of day:

Vivian: "We are actually cutting four songs to help us secure a record deal. So these four songs will make it on the record, but they're only the first four, so I would hope to have it done this year, for sure, and probably released by the end of the year. I mean, that's my personal target, but we need to cut these first four songs to actually secure the deal."

On the progress of the songwriting sessions for DEF LEPPARD's new album:

Vivian: "We got together in Ireland, at Joe's [Elliott, vocals] studio in Dublin, for all of February; we were there for just over four weeks. And we, actually, set up and played real time, the five of us, which is not something we normally do in the studio; in fact, we hadn't done that since the 'Slang' record [which came out in 1996]. And that was great. I personally prefer when the band works that way, because we tend to capture more of our rock element when we do that. And that's exactly what we did; within the first week, we had, I think, four rock songs done. And that was something that we consciously wanted to do for a new LEPPARD record — to try and make sure that we covered the rock element. So that was the first and the easiest part of it. And then it gets a little bit more difficult, 'cause then we're starting to write to order, then we're starting to analyze, 'Well, what kind of a song do we need next?' kind of a thing. This is where it starts annoying me, personally, because it becomes more of a thought process than a creative process. But it's inevitable that LEPPARD goes through this; every time we make a record, we go through this to varying degrees. We're doing this record in installments. Our next installment is in May in Dublin, Unfortunately, I won't be going there for May, 'cause I've got some medical issues I've gotta take care of before [our summer] tour [with KISS]. But then our third and final installment will be in November, to finish up the record, and we're hoping for a release for early spring 2015."

On how he is doing, health-wise, after he was diagnosed with Hodgkin's lymphoma last year (Hodgkin's lymphoma is a cancer of the immune system characterized by the painless enlargement of lymph nodes, spleen, or immune tissue):

Vivian: "I'm doing good. It seems to be, kind of, coming back again. But I'm not concerned about it. I mean, it's just a process. I mean, it always was a little bit touch-and-go. But, you know, it's just a process to get through. I mean, like I said, it's absolutely nothing I'm concerned about, but it's something I need to start the process, I need to get a handle on, so that I am free and clear to tour this summer. So, all good. You know what I mean?!"