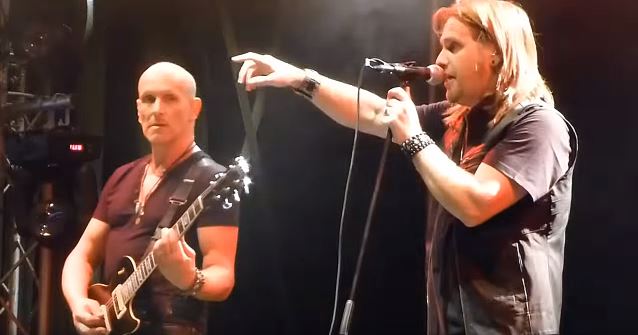 LAST IN LINE — the band featuring DEF LEPPARD guitarist Vivian Campbell alongside fellow founding DIO members Vinny Appice, Jimmy Bain and Claude Schnell, plus singer Andrew Freeman, who has previously fronted HURRICANE and LYNCH MOB — has set "Heavy Crown" as the title of its debut album, due on February 19, 2016 via Frontiers Music Srl. The CD was recorded at a Southern California studio with producer Jeff Pilson, a veteran bassist who has played with DIO, FOREIGNER, DOKKEN and T&N, among others.

LAST IN LINE recently filmed music videos for the songs "The Devil In Me" and "Starmaker" with director Jamie Brown of Smoking Gun, Inc. and co-producer Thomas McNeely. The first clip is expected to make its online debut later this month.

Speaking to JAM Magazine, Vivian stated about the formation of LAST IN LINE: "That came about by accident and not design. A few years ago, DEF LEPPARD were on hiatus, and I got a call from Scott Gorham from THIN LIZZY asking if I'd be interested to go on tour and play guitar with THIN LIZZY. So, of course, I said yes."

He continued: "THIN LIZZY were such a hugely influential band to me, and the guitar players in that band — Scott Gorham and Brian Robertson, and then, in later years, Gary Moore — were a huge, huge influence on my playing. So, for me, to be on stage with Scott and with Brian Downey, the original drummer, playing those songs really re-ignited my passion for playing my instrument again. So when I came home from that tour, I called Vinny Appice and Jimmy Bain, the original drummer and bass player from the DIO band. Vinny and Jimmy and I wrote and recorded the first three DIO albums with Ronnie Dio; we did the 'Holy Diver' album, the 'The Last In Line' album and the 'Sacred Heart' album. So, I just wanted to play guitar again. So we went into a rehearsal room and we started playing this stuff. And it had been over 27 years since we played [together], but it could have been 27 minutes, because the chemistry was still there and it was very immediate. So, one thing led to another. We kind of said, 'Wouldn't it be great if we actually had a singer to kind of complete it, to round it out?' And Vinny suggested this guy called Andrew Freeman that he knew, and Andy only lived about ten minutes away, so he literally called him there and then. Andy was available, Andy drove down to the rehearsal room, and he started singing. And I just got goosebumps on my arms, because it was so emotionally powerful to be able to play these songs again with Vinny and Jimmy. But Andy was bringing an equal amount of passion and power to it that Ronnie would have brought, but he had a totally different sound to his voice, a whole different tonality. And that really got me thinking about… If he had walked in there sounding just like Ronnie, it would have been creepy. But the fact that he had equal power but sounded totally different got me thinking that this would be a different kind of a take on these original songs."

He went on to say: "So we booked some shows, and we played songs from the first three [DIO] albums. We called the band LAST IN LINE after the second DIO album. And the response was really, really, really good. And we weren't thinking about doing new music, but we actually got offered a record deal by an Italian label called Frontiers Records. So, we thought, 'Well, why not? If somebody is offering us a budget to make the record.' So we went in the studio and we started writing, and it was very immediate, it was very, very easy. In fact, [the songs came together] the way they did when we were writing 'Holy Diver'. It all started with Jimmy and Vinny and myself getting into a room, just the three of us, exchanging musical ideas. And Ronnie would come down later and we'd play him what we had and he would sit in the back of the room with a notepad, and he'd write lyrics and then he'd get up and he'd sing. And within four or five or six hours, we'd have [a song written]. And that's kind of how this happened."

Regarding the collaboration with Pilson, Campbell said: "I've known Jeff as a musician and as a friend for years, but I had no idea how great a rock producer he is. And he really blew me away. It was the perfect marriage between us. And the record, we knew it was gonna be good, but it far exceeded all of our expectations. So we are extremely excited about it."

Vivian also explained the decision to wait until next year before releasing the LAST IN LINE debut. He said: "The reason why we're waiting 'till 2016 to release it is because I want to be available to tour the record. I think it deserves being given the opportunity." He added: "In fact, the very first single we're gonna do is… DEF LEPPARD is going on a cruise in January, for four or five days, out of Miami, and LAST IN LINE is gonna be one of the guest acts on the cruise. So that'll be the [launch gig for] the band [in support of] the new record."

Asked if the LAST IN LINE material sounds like the classic DIO albums, Vivian told Eddie Trunk I na recent interview: "The majority of it… Well, actually, I wouldn't say the majority of it… I would say a good 50 percent of the songs would sound right at home on those first three DIO albums, and the others have a bit more of a modern edge to them. I mean, when you get Vinny and Jimmy and I playing, it sounds like the early DIO records, 'cause that's what it is. Obviously, Andy is a very, very different singer, he's got a very different instrument, and he writes lyrics very differently. I'm very, very impressed with where Andy has gone lyrically on the record, too; that's another thing. So it's great. It is so epic sounding. We've got some amazing songs on this, and I'm hyper excited about it, as you can probably tell."