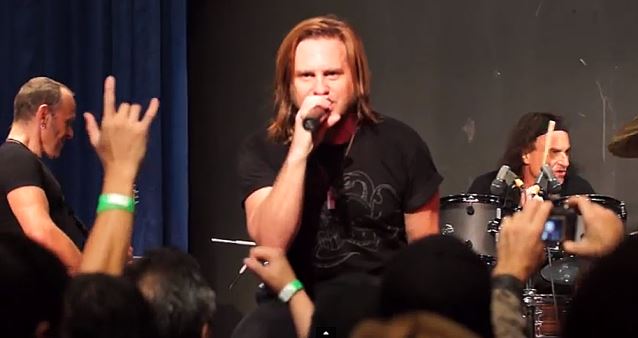 ROCKwellUnScene.com has uploaded multi-camera video footage of LAST IN LINE performing the song "We Rock" on October 12 at Ramona Mainstage in Ramona, California. Check it out below. Photos of the concert are available at this location.

Speaking to David "Gus" Griesinger of BackstageAxxess.com at this past January's NAMM (National Association Of Music Merchants) show at the Anaheim Convention Center in Anaheim, California, Campbell stated about reuniting with the original DIO band: "We're calling it LAST IN LINE after the second [DIO] album. It's the original DIO band — myself, Vinny Appice on drums, Jimmy Bain on bass, Claude Schnell on keyboards, and we found a terrific singer called Andy Freeman, who can totally do justice to the songs. Actually, he doesn't sound anything like Ronnie [James Dio], which is great, [because] I don't wanna draw that comaprison. Ronnie was a very unique singer, but Andy is a great singer in his own right, and he certainly sings the songs very respectfully.