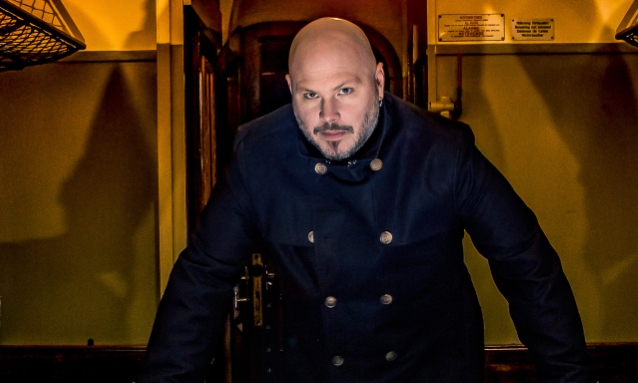 SOILWORK vocalist Björn "Speed" Strid recently spoke with Australia's Heavy magazine. The full conversation can be streamed below. A few excerpts follow (as transcribed by BLABBERMOUTH.NET).

On the "craziest" thing he's seen happen at one of his concerts:

Björn: "There's a lot of wheelchair surfing nowadays. It's really awesome to see — it's such a kick... I have this other band, THE NIGHT FLIGHT ORCHESTRA, and I've seen people coming dressed up as me with a beret and white suit. That's pretty cool. It's kind of fun when you're on stage seeing that stuff."

On how material from the group's latest album, "Verkligheten", has been received:

Björn: "I think they've been working out really well live. I think they've been working out better than 'The Ride Majestic' tracks overall. There are songs, like 'Stålfågel', that we actually put as the encore instead of 'Stabbing The Drama'. That's definitely a first. Ever since we released 'Stabbing The Drama', we always had to end the show with [that], but on the European tour that we did together with AMORPHIS at the beginning of the year and also the summer festivals, we actually ended with 'Stålfågel', because it was getting such a crazy reaction."

On how the group chooses which new songs to perform live:

Björn: "We usually do rehearsals, but you never know what it's going to be until you're actually on stage. It's like three steps — you write the song and record it, and then you rehearse it, and then you play it live. It's three completely different things, so you never know what it's going to be like. It's just a matter of playing it live. You find out pretty quickly if the song is going to work out live or not. Some songs, you feel like, 'This one is meant to be played live,' but then when you play it, there's just something missing, and you don't know what it is."

On whether he gets nervous prior to debuting new songs live:

Björn: "Absolutely. It can get pretty nerve-racking. I think the vocals are getting more and more extreme as well. I try to really push myself, and it's more fun that way, but obviously, you get pretty nervous — 'What if I can't pull it off live?' For example, that last really high note on 'Stålfågel', I was, like, 'Am I going to able to nail that live?' I was sort of worried about that, but it's been working so far, but it took some time. You just need to play it live a bunch of times live, and then it's there. I think you need the adrenaline too, and then you can pull off whatever you want."

Björn: "I think I've built up a really strong voice over the years. I have quite a stamina when it comes to the voice, and it's all about the adrenaline as well. It was kind of interesting this summer since we shows with both THE NIGHT FLIGHT ORCHESTRA and SOILWORK at the same festival and at the same day, with just one hour in between. That was pretty crazy, but I noticed how I was singing better with SOILWORK [that day]. It was like, 'Oh, maybe I should start warming up after 20 years.'"

On his extracurricular interests:

Björn: "I've been trying really hard to find a hobby that doesn't involve music. I like antiques; I like to go to flea markets and browse the Internet for cool-designed furniture and stuff like that. I just recently built a veranda. I've never done anything like that before. That was definitely a challenge, but it was really nice, especially this summer when we did all those festivals in the weekend and then coming home, instead of lying there and waiting for the hangover to hit, I just went out into the garden and starting building the veranda, so that was quite a savior. It might be something that I try to do some more — work with the hands instead of the mind."

On his upcoming schedule:

THE NIGHT FLIGHT ORCHESTRA released its fourth album, "Sometimes The World Ain't Enough", in June of 2018.