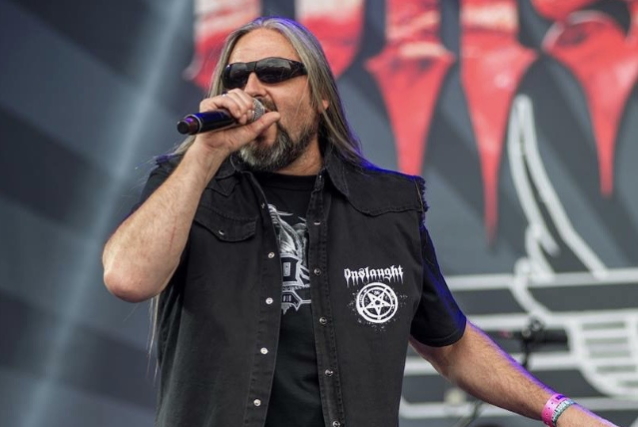 ONSLAUGHT said in a statement: "Due to the nature of the modern-day music industry, some things simply aren't sustainable year after year and Sy has now taken a different full-time career path.

"We would like to wish Sy and his family all the very best on this new journey through life and give him huge thanks for his immense vocal performances in the band over the years. We've shared so many great experiences, made some very cool records and played some really amazing shows across the globe.

"Unfortunately, nothing lasts forever, and for us as a band, what doesn't kill us will once again make us stronger."

ONSLAUGHT is currently finalizing work on their as-yet-untitled new album. More information will be made available soon.

Back in August 2018, ONSLAUGHT debuted a new song, "A Perfect Day To Die", at the Bloodstock Open Air festival at Catton Park, Derbyshire, United Kingdom.

The band's last LP, "VI", was released in September 2013 via AFM Records. The follow-up to 2011's "Sounds Of Violence" was mixed by Thomas "Plec" Johansson (TIAMAT, SCAR SYMMETRY) at Panic Room studios in Skara, Sweden.