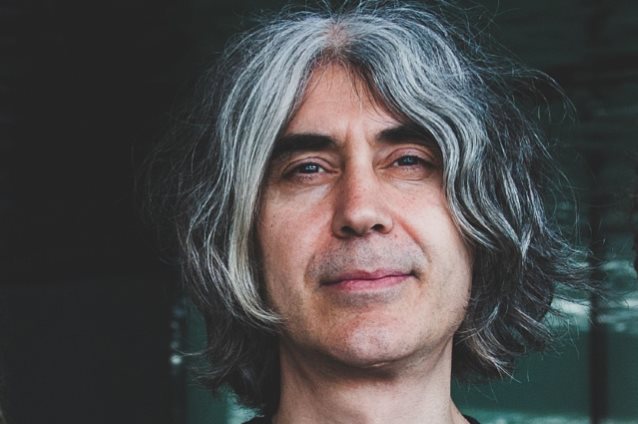 Impact metal channel conducted an interview with drummer Michel "Away" Langevin of legendary Canadian sci-fi progressive metallers VOIVOD prior to the band's October 4 show at Room 041 in Dürer Kert, Budapest, Hungary. You can watch the entire chat below. A few excerpts follow (transcribed by BLABBERMOUTH.NET).

On whether VOIVOD would ever play classic albums like 1987's "Killing Technology" or the following year's "Dimension Hatröss" in full live:

Michel: "We were asked to do that this year and we were also asked to do that next year for 'Dimension Hatröss'. It's not something we are really into doing unless it's a festival. On tour, we prefer to play a 'greatest hits' of VOIVOD. We think it's more festive and 'Dimension Hatröss' can be a bit serious, so we're thinking about it, but we kind of prefer to do an overview of our career."

On the band's he would pick for a hypothetical VOIVOD tribute album:

Michel: "That's a tough one. Probably VEKTOR, MESHUGGAH, bands that I consider children of VOIVOD, although they may not be influenced by VOIVOD or they are influenced, but not directly. Yeah, there quite a few bands nowadays that try to play sci-fi thrash and it could be interesting to have a tribute to VOIVOD."

On what his own personal art creations mean to him:

Michel: "I'm interested in politics, but we don't talk about it directly in VOIVOD. It is there, there is political content, but it's expressed through sci-fi folk tales rather than naming politicians. But, it is a position we take about what's going on in earth in our lyrics, but it's not political like bands that listen to CRASS or CONFLICT. It's not that political. But there are many bands that I admire that get their messages through the same type of imagery, like RUSH or MAGMA. When you dig a little deeper, you realize these are important messages."

On whether he agrees with the sentiment that politics has no room in heavy metal music:

Michel: "It's not true, especially in thrash, which was influenced by hardcore. Back in the day, most thrash metal bands talked about nuclear weapons and that was a way of expressing our anger and it's angry music, but at the end of the day, it's a rock and roll show, so I understand that people want to have fun, but if some people want to talk about important subjects, it's okay."

Michel: "This year, we came to Europe twice, but we didn't go to the USA. Instead, we spent the first six months of the year [writing] an album, so as soon as we get back home at the end of October, we start recording the beginning of November. So that's our plan for the rest of the year, to record the new album. It's a concept album, very intricate. [Vocalist] Snake [Denis Bélanger] has been writing the lyrics on the bus. We are finishing them. We're making demos and templates on the bus right now and trying to get ready for the studio. Snake is still writing the lyrics, so we don't have a title for the songs. We only have working titles, but the music is ready, which is a good part."

On what to expect from the band's forthcoming studio album:

Michel: "It's very progressive thrash. Lots of psychedelia as well. The songs are pretty long. There is only one short rocker; all the rest is progressive music. It's a continuation of [2016's] 'Post Society' [EP]."

Completing the vinyl release of the five songs featured on the "Post Society" mini-album, "Silver Machine" includes the HAWKWIND cover version that serves as the EP's title track as well as the song "Post Society".