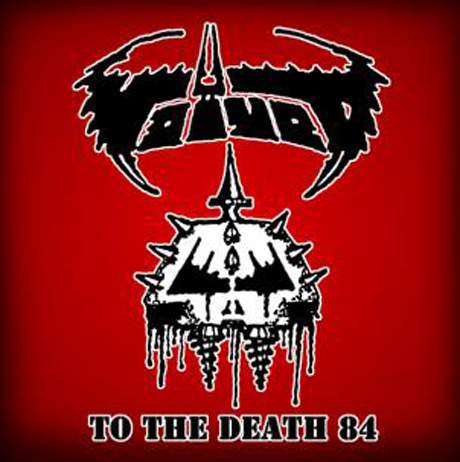 VOIVOD Drummer Talks 'To The Death 84' In New Audio Interview

ExploreMusic's Sully recently conducted an interview with drummer Michel "Away" Langevin of Canadian metal innovators VOIVOD about the release of the band's original demo tape from 1984. Entitled "To The Death 84", the set includes material that was recorded in the band's Quebec jam space in January 1984. The lineup for this record includes Snake (Denis Bélanger) on vocals, Piggy (Denis D'Amour) on guitar, Blacky (Jean-Yves Thériault) on bass and Away (Michel Langevin) on drums.

You can now listen to ExploreMusic's interview with Away using the SoundCloud player below.

In addition to material that would later appear on the band's "War And Pain" debut, "To The Death 84" includes several other early VOIVOD offerings, as well as covers of MERCYFUL FATE and VENOM.

"To The Death 1984" was released on November 22 as a CD or double LP via Alternative Tentacles.

VOIVOD is tentatively scheduled to enter the studio in January to begin recording its new album for a tentative summer release. The follow-up to 2009's "Infini" will contain the band's first music to be written with new guitarist Daniel "Chewy" Mongrain (MARTYR) following the passing of original axeman Denis "Piggy" D'Amour in 2005.

According to a posting on the VOIVOD Facebook page, fans can "expect something in the vein of 'Nothingface' with some elements from the other albums. It will be a classic VOIVOD album."

Regarding what the new VOIVOD songs sound like, Mongrain said in a recent interview, "As a VOIVOD fan since I am 12 years old and early rise of VOIVOD in late '80s and everything, I think… I'm in conflict of interest right now. [Laughs] I like the old stuff as much as the new stuff, so I think it's a blend of everything. It's really a team work and Blacky [Jean-Yves Thériault] is back on the 'blower bass' — he's got the original sound — and we're having a blast jamming, improvising and writing. I think it's working pretty good."

On the topic of the lyrical themes covered in the new VOIVOD tracks, singer Denis "Snake" Bélanger said, "The song we played [on the recent European tour] ['Kaleidos'] is about conspiracy involving drugs and the FBI… [Laughs] It's hard to describe because we're kind of early in the process. There's another song called 'Target Earth', which is more like a spacy, conspiracy, controlling the information around the world. The main thing is the 'war' of information. You know, somebody Osama Bin Laden is dead, someone [else] says he's not… It gets to a point where everybody has his own story and nobody is sure what the truth is. There's people above everything controlling the information."

In a recent interview with Exclaim.ca, Away stated about VOIVOD's forthcoming studio album, "It's more in the progressive metal vein, so it's reminiscent of the 'Dimension Hatröss' era."