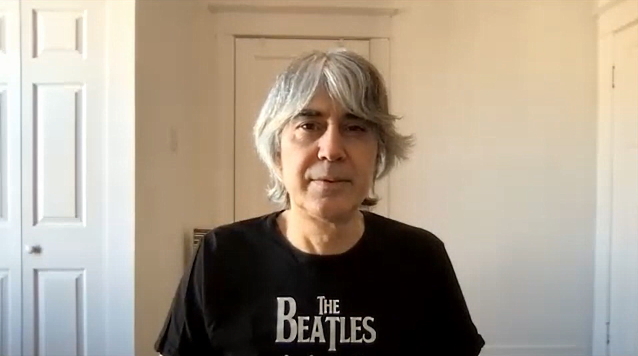 VOIVOD drummer Michel "Away" Langevin spoke to Montreal Rocks about the inspiration for the title of the band's upcoming studio album, "Synchro Anarchy". He said (as transcribed by BLABBERMOUTH.NET): "It was a chain of events, really. When we came back from touring Europe with GWAR at the end of 2019, we took a break for holidays. And we got back together in early 2020 to record some improvisations and ideas that everybody had. So after one of these rehearsals, I was untying my shoes and I had this flash of skipping a beat every bar. So I stood up and I said, 'Hey, I have an idea,' and I was walking towards the drum and I stepped on one of my shoelaces and I tripped and almost fell on the drum kit. It was pretty funny because the flash I had was to skip a beat and I skipped a step and all that. Anyhow, I played the beat and Chewy [guitarist Daniel Mongrain] recorded the beat and named it 'Away's Shoelace Incident'. And it gave Snake [singer Denis Bélanger] the idea of writing lyrics about these strange timings in life when you stop to tie your shoe and a car will whizz by and a second later it will be over and these things. And he had shortened the title to 'Shoelace', but I saw in his lyrics the words 'Synchro Anarchy' and I said, 'Man, it would be a great title for the song.' And he agreed."

Away continued: "Because of the pandemic, half of the work really was done while socially distancing because it was in mid-March 2020 that the lockdown happened and we didn't have access to the studio anymore. So we were stuck with what we had recorded in early 2020 — just snippets of ideas. And then we spent months trying to get an album out of that. It was a huge puzzle. And even when we got into the studio last year, we were not one hundred percent prepared because we are used to rehearsing a lot more before an album. So we were still building the album while recording, writing lyrics and music. So the whole thing led us to think it would be a good idea to call the album 'Synchro Anarchy'. And it's also representative of the planet we are living on right now. So it captures the whole thing."

"Synchro Anarchy" will be released on February 11 via Century Media Records. The follow-up to 2018's "The Wake" was produced by Francis Perron at RadicArt Studio and features cover artwork created by Langevin.

The video for the "Synchro Anarchy" title track was created by Syl Disjonk of 5600 K Productions and can be seen below.

When the official music video for "Planet Eaters" was first released, Langevin said: "On April 21st, 2021, an animated video for the song 'Nothingface' popped up online. The video was done by Pierre Menetrier on an Amiga computer in 1991, which I thought was beyond cool. The spectacular imagery and visual effects were just perfect for a VOIVOD song. After wrapping up the recording and mixing of the 'Synchro Anarchy' album, we all agreed on 'Planet Eaters' as the first single/video. We thought the song had a vintage 'Nothingface'/'Hatröss' vibe, so I immediately contacted Pierre and asked him if he could make a video for the song. Once again, the result is just mind-blowing. You just can't get more Voivodian than that!"