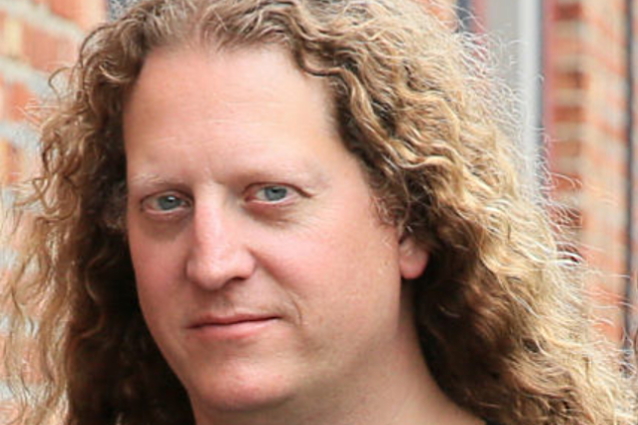 While in confinement, trying to adapt and make the best out of the situation, Dan "Chewy" Mongrain (VOIVOD) decided to give it a go at doing this first tutorial video — a very exhaustive autopsy of the solo of "Obsolete Beings" which is the opening track and first single of the latest VOIVOD release and Juno-winning award for best metal album of the year in 2019 in Canada, "The Wake" (Century Media).

"These guitar/music lesson and playthroughs cover a lot of aspects of my guitar playing, composing, soloing techniques in great details," Mongrain says. "I thought it would be a good time for sharing this. And it seems to be appreciated a lot! I hope to do more in the near future."

In other news, Mongrain is now officially part of DiMarzio pickup artists.

"Thanx to my friend David Davidson of REVOCATION. He was kind to introduce me to the DiMarzio team. We toured together last year and had a blast on the road, David is a great guitar player and a very nice guy with a great sense of humor."

VOIVOD is currently working on a live record and a new studio album, among other exciting projects coming out this year.

Last fall, Mongrain spoke to The Jimmy Cabs "5150 Interview Series" about how he approached the unenviable task of replacing founding VOIVOD guitarist Denis "Piggy" D'Amour, who passed away due to complications from colon cancer in 2005. D'Amour's unconventional brand of guitar playing was a staple of VOIVOD's sound, but Mongrain, a lifelong fan of the band, has injected his own personality into VOIVOD while retaining some of the hallmarks from D'Amour's playing.

Asked about how went about stepping into D'Amour's shoes, as well as the writing process for "The Wake", Mongrain said: "When we worked on 'Target Earth', which came out in 2013, it was the first time we would work together for composing and everything. I had this kind of shadow of what VOIVOD should sound like, or, would sound like without Piggy. I was pretty worried about that when I was writing riffs and ideas. But at the same time, after a while, I just let go of it. I thought, 'I'm a fan of VOIVOD since I was 11 years old. It's the band I've listened to the most in my entire life.' And I've listened to a lot of stuff, like different genres, but VOIVOD was always the center. It always gave me a lot of… VOIVOD was so unique that everything else for me was kind of bland. I always was looking for this spark of originality and uniqueness in everything else that I've listened to. When I became a musician and composer, I wanted to have this thing, but I think I already had it because of what I was listening to. It kind of grew up in me naturally. When we did the 'Target Earth', after a while, I became more comfortable and more natural at writing, and without asking too many questions to myself. Then, a few years [later], we worked on 'Post Society' with the new lineup, so something opened for all of us with the new dynamics of the new lineup. We would work together without any ego in the way. Once an idea was out there, it was everybody's idea. It was not my or his or whatever. And we would work together to make it the best idea, the best music possible. It became VOIVOD music right away. [Snaps fingers] As soon as Michel ['Away' Langevin, drums] is playing and 'Snake' [Denis Bélanger] is singing, it becomes VOIVOD colors. It's pretty magical."

He continued: "For 'The Wake', we had the team which produced 'Post Society'. We developed this way of working, which worked really well. It was very easy then to know in advance what kind of step process we would take to make it in the studio and be ready for every part and every song, except for one. 'Sonic Mycelium', the last song of the album, I had to write between two gigs in Montreal, a TV show that I do every year to help kids in the street; I participate in it as a freelance, but Michel is a very fast recording drummer. He does everything pretty much in one take, and he does different takes until it's satisfactory, but after a week of drumming, not even a week, he was done with the drum tracks, and this song was not finished. [Laughs] I had this idea of using the main theme of every song and put it together as a puzzle, so I had two days and a half to finish it at home because it was the only song that we didn't rehearse at all. We haven't seen each other to practice, so I had to do the puzzle and everything so we could finish the drum tracks. It ended up to be 12 minutes of music and I had only maybe two or three minutes done before that. That one was pretty stressful, but it came out good with the pressure and everything. Snake also had this idea to use the main vocal themes from every song and put it over other parts of other songs. It's quite interesting for the fan who listened to it because it's a puzzle. It's interactive in the way that, 'Oh! That's the vocal from that song but that's the riff from the song. It's not in the same key in the same tempo.' Unconsciously, but not really, in a knowledge kind of approach, unless you're a musician or an educated musician. But, anyway, we worked all together very hard. It was a very fun process, too."