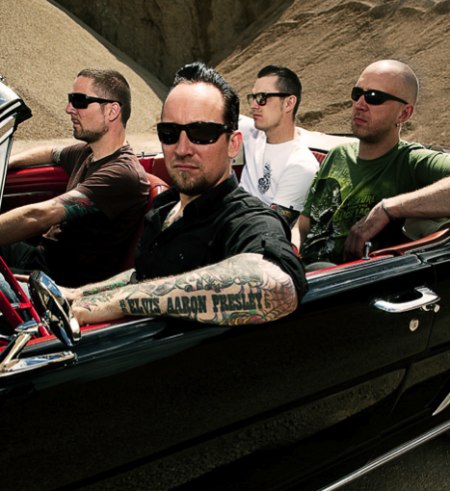 Danish metal rock 'n' rollers VOLBEAT have been forced to cancel all of the shows on their debut headline tour of the U.K. and Ireland due to vocalist/guitarist Michael Poulsen having to remain under strict medical supervision.

The band had already pulled the first five dates of the tour in the hope that a few days of uninterrupted rest would enable Poulsen to return to full fitness; sadly, this hasn't proved to be the case.

The VOLBEAT members deeply regret the cancellation of the 13 shows; fans will, of course, be able to reclaim their money from point of purchase.

The band's official statement on the cancelation reads as follows:

"As you may or may not be aware, VOLBEAT had to cancel the first five shows of their U.K. tour…

"After the completion of the mainland European shows, Michael was suffering from exhaustion and has had to undergo various tests at hospital.

"We were anticipating the tour going ahead from December 1; however, it has now become apparent that this is not going to be viable, and we are going to have to cancel all the U.K. dates forthwith. We are hoping to be able to reschedule these, but have no fixed dates at this time to be able to do so, hence this being a cancellation rather than keeping all tickets valid.

"Our sincerest apologies for the inconvenience, and we will, of course, let you know as soon as we have further news."

"Heaven Nor Hell", the new video from VOLBEAT, can be viewed below. The song comes off the band's fourth album, "Beyond Hell/Above Heaven", which was released digitally in the U.S. on November 9 and will be made available as a physical CD on December 15.

"Beyond Hell/Above Heaven" was released in Germany on September 10 and in most parts of Europe on September 13 via Vertigo/Universal. The CD was once again recorded at Hansen Studios in Ribe, Denmark with producer Jacob Hansen. The cover artwork was created by illustrator Karsten Wrysand and can be viewed below.