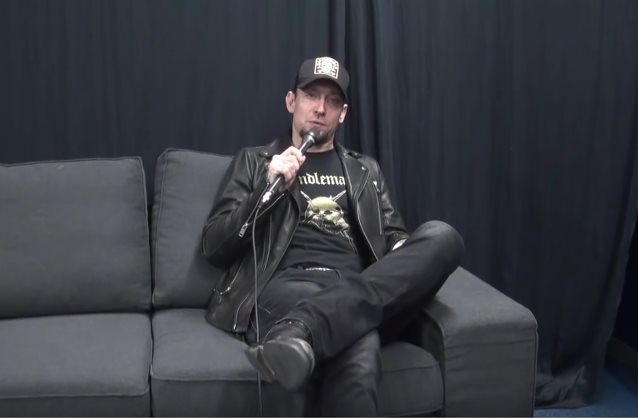 VOLBEAT Frontman: 'These Days, The Youngsters Have A Favorite Band Every Second Week'

Finland's Kaaos TV conducted an interview with guitarist/vocalist Michael Poulsen of Danish/American rock 'n' rollers VOLBEAT before the band's October 24 concert at Hartwall Areena in Helsinki. You can now watch the chat below.

Speaking about how the barrage of easy information in the Internet age has made the gap between audience and artist ever smaller, Michael said: "These days, the youngsters have a favorite band every second week, because everything is in front of them. They get all the information very fast. So I totally agree that there's not that many bands who have that mystique anymore. So what we are trying to do and how we feel comfortable about promoting ourselves is you don't have to do everything. People still need to figure out how to find a band or chase them. So there's a lot of offers that we get for television and commercials and a lot of different medias we actually turn down."

He continued: "We do appreciate the medias being interested in VOLBEAT, but, for us, it's not a must to do everything. We will concentrate on the music and being on stage, because then I also think that… I know how it is to be a fan. I would not like to see my idols every day on television or listen to them on the radio, because the mystique just flies out of the window. So we are trying to concentrate on why we are here, and that's because of the music — playing the music, being on stage, being on the road. And I think that's good for us; that's the way it works for us."

Poulsen added: "I'm not saying that other bands should do it like that, but I come from the old-school underground, and I remember how we were promoting ourselves; it was with flyers and tape-trading. You printed your old back-and-white posters and you were up on your bicycle and you put it up with glue and everything. I still remember those days, and there was just a different soul about it. So it is what it is."