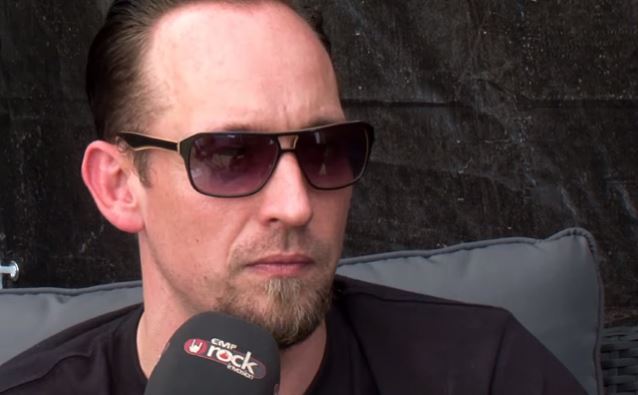 During an appearance on HATEBREED frontman Jamey Jasta's official podcast, "The Jasta Show", guitarist/vocalist Michael Poulsen of Danish/American metal rock 'n' rollers VOLBEAT spoke about the progress of the songwriting sessions for the follow-up to last year's "Outlaw Gentlemen & Shady Ladies" album, tentatively due before the end of 2015. He said: "Right now I have ideas for ten songs. Three of them we're capable of playing right now. [But] I haven't written any lyrics yet. Right now it's more music and melodies."

Regarding the actual writing process, Michael said: "I always have this notebook. I buy a notebook every year when we have to sit down and write a new album. I have a notebook where I write down ideas and I have tons of stuff on my mobile where I just sit with an acoustic guitar and sing."

He added: "I don't have a really funky setup at home. I have an amp and a cassette record player, and I have those ten tapes that I'm recording my ideas [on]. I can wake up and record, then I go to bed, and then the next morning, you push play and say, 'What the fuck is that crap? What were you thinking?' And you could go to bed and think this is the best idea you ever had. And you're probably still sleeping when you're recording; I don't know what happens. But now and then, something good really pops up.

"So, yeah, when I'm home, my head is spinning all the time. And I just bought a new house where I found out that one of the rooms in the house had a really good sound, acoustic. So when I just sit on a chair with an acoustic guitar and sing, it sounds amazing."

According to Poulsen, he doesn't need any fancy equipment to help him capture ideas, preferring to keep his method of working as "old school" as possible. He said: "I had a friend who's really nerdy about that stuff. [He told me] 'Oh, I don't get it. You should at least have an eight-track and record with those speakers. I'll make the setup for you.' I said, 'Ah, okay.' After a week, I said, 'Can you just remove all that crap? I'm not using it.' [And he said] 'But what are you using?' [And I said] 'I'm back to the tape recorder.' [He asked] 'Really.' I said, 'That's how I like to work.'"

He continued: "The most important thing for me is just to be able to remember my ideas; it's not to put the pieces together, because I already did that in my head. They're there, and I know how I want it to sound like when I go to the rehearsal room with Jon [Larsen], my drummer.

"Basically, most of the time, the [other] guys [in VOLBEAT] have no idea how the record's gonna sound like before we are out of the studio, because I have it all in my head. So I can tell them in the rehearsal room, 'On this song, there'll be a banjo her, and the next verse, there'll be a female voice,' And they'll go, 'Okay.' But they don't know how it sounds like before we are in the studio. But I know. And that's enough for me. I don't have to sit and record it and listen to it afterwards, because it's spinning in my head all the time."

"Outlaw Gentlemen & Shady Ladies" has sold more than 250,000 copies in the U.S. The set features the No. 1 singles "The Hangman's Body Count" and "Lola Montez", as well as the Top 5 track "Dead But Rising" and new single "Doc Holliday".