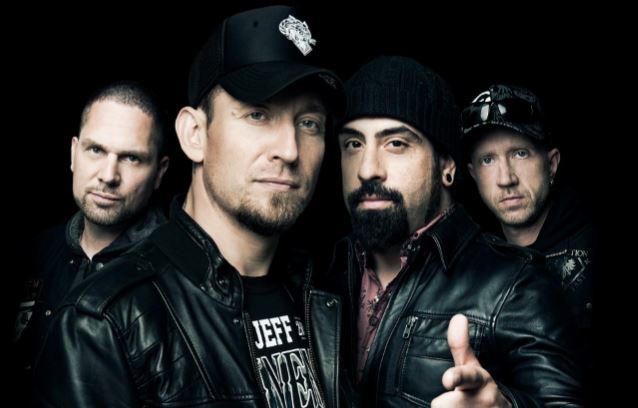 In connection with the planning and preparation of VOLBEAT's extensive future plans and wishes for 2016 and onward, the Danish/American rock 'n' rollers have parted ways with bassist Anders Kjølholm. All matters related hereto have been mutually and respectfully agreed upon.

VOLBEAT guitarist/vocalist Michael Poulsen and drummer Jon Larsen elaborate: "Anders has been a loyal friend and bandmate since 2001. We've toured most parts of the world and shared experiences that only few bands get to do. We're very thankful for this and wish Anders all the best in the future."

Added Anders: "It has been a great experience to be part of the VOLBEAT family for so long and I wish Michael, Jon and Rob [Caggiano, guitar], everyone involved with the band and of course all the fans all the best on the continued journey.

All announced shows will happen as planned.

VOLBEAT performed a brand new song, "The Devil's Bleeding Crown", in full live for the first time on August 1 in front of over 37,000 people at Tusindarsskoven in Odense, Denmark.

Speaking about the progress of the songwriting sessions for VOLBEAT's follow-up to 2013's "Outlaw Gentlemen & Shady Ladies" album, Poulsen told the Columbus, Ohio radio station 99.7 The Blitz at the Rock On The Range festival in May: "Right now I'm writing on the road. We have rehearsed around five new songs in soundcheck. So, hopefully, before we go home in a couple of weeks, we will have six new songs and then I have to finish the second half [of the album] when I come home. And then we'll be ready for the studio around November."

VOLBEAT earlier in the year completed a North American tour with support from ANTHRAX and CROBOT.