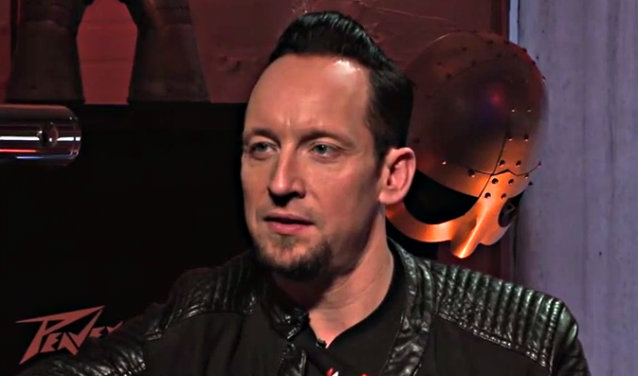 Michael Poulsen (guitar, vocals) and Rob Caggiano (guitar) of Danish/American metal rock 'n' rollers VOLBEAT took part in an interview on a recent episode of the French show "Une Dose 2 Metal" on L'Enorme TV. You can now watch the entire chat below.

VOLBEAT released a "tour edition" of its latest album, "Outlaw Gentlemen & Shady Ladies", on November 4. The new version of the Danish/American rock act's fifth studio album contains new bonus tracks and a live DVD. The latter features footage of the group performing at a number of major summer festivals in Europe, including the Download festival in the U.K., Rock Am Ring and Rock'n'Heim in Germany, Hellfest in France and Denmark's Roskilde Festival.

"Outlaw Gentlemen & Shady Ladies" debuted at No. 1 in several countries when it arrived last April, with the disc entering the Billboard album chart at No. 9.

The latest single from the record, "Lola Montez", broke into the Active Rock Top 10 at No. 7.

The song is one of many from the album based on historical or fictional characters from the Old West. Frontman Michael Poulsen told The Pulse Of Radio he wanted to use some of the lesser known figures from the era. "Of course, I was flirting a little around with Wyatt Earp, but the thing is, everybody knows Wyatt Earp," he said. "Do we need another story about Wyatt Earp? I don't know, you know, so I choosed [sic] some other characters, you know, like Black Bart — not everyone have heard of him. Doc Holliday's somebody people know, but there's also a lot of people [that] don't know him. So I wanted to bring up some characters that were not that well known, but who were really interesting."

VOLBEAT's four previous U.S. singles — "The Hangman's Body Count", "Still Counting", "A Warrior's Call" and "Heaven Nor Hell" — all went to No. 1 on the rock chart.