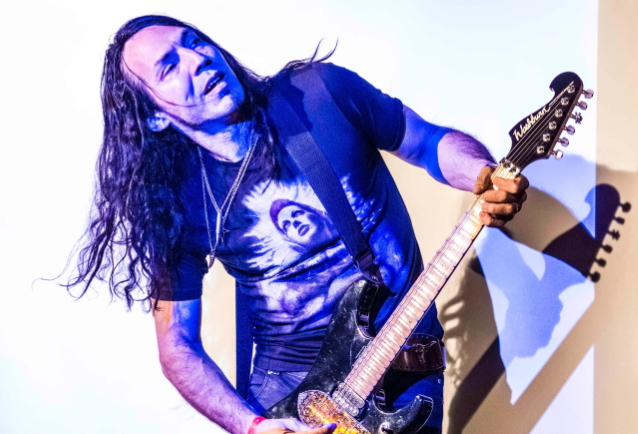 ATOMIC ANNIE is an active member of the Rock Academy's Turku branch, in which Blair has been deeply involved in "band coaching" for several years. The franchised city-funded social programs (there are currently six nationwide) include two-year free enrollments for young bands in which they receive close support, recording and live experience, instructional clinics and personal tutoring from pros.

Blair states: "'Wild Child', of course, is one of our favorite epic old school tunes to perform with the band, and it's one of those perfectly written ones that works in many interations — like 'Love Machine' by Sweden's GRANDE LUXE or the swing/ska 'Somebody' by THE JUMPIN' JIMES.

"I really never sit in with anyone for our own songs, but this was an invitation tough to refuse indeed.

"It was a rush to play with these guys who have been in our band coaching program (Turku Rock Academy) for years, and they nailed it! Benji's (Benjamin Stromsund, ATOMIC ANNIE singer) in this context is enthralling and spot-on. However, the guys did throw me a curve ball when they transposed the key, so all of my normal shit that I play just went flying out the window. I had to start from scratch, and an open tuning used for SIGNAL2NOISE stuff actually worked perfectly with the slide guitar!"

W.A.S.P. was forced to cancel all nine weeks of the fall 2020 "1984 To Headless" European tour, and rescheduling is in progress.