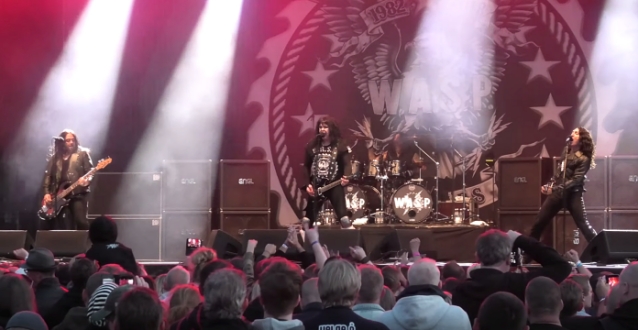 Fan-filmed video footage of W.A.S.P.'s entire July 5 performance at Helgeåfestivalen at Folkets Park in Knislinge, Sweden can be seen below.

Brazilian drummer Aquiles Priester is back behind the kit for W.A.S.P.'s summer 2019 European dates after being forced to miss last year's shows due to a scheduling conflict.

The summer 2018 W.A.S.P. festival appearances were completed with the help of renowned drummer, songwriter and multi-instrumentalist Brian Tichy, known for his tours of duty with WHITESNAKE, BILLY IDOL, FOREIGNER and OZZY OSBOURNE.

Priester previously completed a European tour with W.A.S.P. in the fall of 2017.

Drummer Mike Dupke left W.A.S.P. in 2015 after a nine-year stint with the band. He was initially replaced on the road by YNGWIE MALMSTEEN drummer Patrick Johansson and, later, by Randy Black (PRIMAL FEAR, DESTRUCTION).

In February 2018, W.A.S.P. released the critically acclaimed 25th-anniversary edition, "ReIdolized (The Soundtrack To The Crimson Idol)", of the band's iconic hit album "The Crimson Idol".